Many teens have been a victim of cyberbullying. AskFM is a somewhat new website that indirectly encourages this form of abuse. People continuously get threats, insults, and even sexual messages.

AskFM is a social media website where people can either ask questions from their own account or anonymously ask questions to users. The users receive these questions and the point of the website is to see their reply. If you click on an account you can see all of the person’s questions, answers, and how many people like their answers.

However, there is a debate about who is at fault for the cyberbullying. Is is the person who accepts and answers the anonymous messages? Or is it the person sending these messages?

On the other side of the argument is sophomore Mali Fenning. She says, “The person who asks the question. There shouldn’t be excuses for mean people. They’re open to what people say, not they’re open to bullying.”

All of the five sophomores that were interviewed did agree on the fact the website is a form of cyberbullying.

When asked if the website was good or bad, sophomore Jasmin Gilliam gave an interesting insight.  She said, “Both. Depends on your social status. People who are more popular, get more everything. Good and bad.”

Currently the hype around AskFM has died down a bit, with many users disabling their account. Having said that there are still multiple posts on Facebook and Twitter asking people to use the site and send anonymous messages to users that are advertised by the users themselves.

There is no other purpose to the site other than to supposedly ask questions. Unfortunately more often than not, there are no questions, just hurtful remarks. If there are questions they are mean spirited and very intrusive.

What will you be? A victim, bully, or bystander of AskFM? 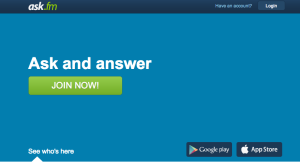