It was a warm summer afternoon and I was inside, scrolling through Netflix in an attempt to find something new to watch when a trailer started playing. The show was called Insatiable. Weird title but I figured I might as well watch it – it couldn’t have been that bad right? Right?

Oh boy. Every Netflix Original is a hit or a miss and this one was definitely a miss.

It starts with Debby Ryan – yes that’s right – DEBBY RYAN, aka Jessie from the Disney, hit Jessie, in a fat suit. From there it only gets worse with clips of merciless bullying from her classmates who call her a host of hideous names such as “Fatty Patty”, “Porky”, and “Butterball.” Then she gets punched by a homeless man, hospitalized, and has her jaw wired shut.

Off to a great start right? Don’t worry it only gets better.

She loses an insane amount of weight (almost like she just took off a fat suit or something) and suddenly gains a full-face of flawless makeup as well (because overweight people can’t wear makeup I guess) and then joins a pageant with dreams of revenge.

From there the trailer just turns into a badly-choreographed, over-sexed action trailer with punches being thrown, men being set on fire and strange close-ups of Debby Ryan’s lips.

I decided not to watch it.

And then 4 months later, again scrolling through Netflix, I found a movie called Dumplin’. “Cute name”, I thought and clicked the trailer.

Instantly I recognized a few similarities: a female, overweight main character, a pageant, and a revenge story. However, past that everything was different.

In Dumplin’ we meet Willowdean Dickson, who is overweight, and her best friend Ellen Dryer, who is not. They both have an affinity for Dolly Parton. Willowdean Dickson is also called names such as “whale” when her and Ellen are in the pool, but it isn’t nearly as vile as the bullying in Insatiable. There is also a huge difference between how they react: Willowdean ignores the comments and tries not to let them get to her whereas Patty sets a man on fire. Past that we meet Willowdean’s mother, Rosie, a former pageant queen hanging on to her former glory and Bo Burnham, a handsome Southern “boy next door” and Willowdean’s main love interest.

Willowdean and Ellen are both dealt the task of carting around Rosie to different pageant events and, after a passive-aggressive comment on Willowdean’s appearance, they decide to enter into the pageant together and stage a “protest in heels”. However, Willowdean’s protest isn’t just a way to say that fat girls can be beautiful too as she strongly states, “No, I’m not the Joan of Arc of fat girls, okay?” Because while the protest is masked in anger surrounding the pageant, it’s actually just a way for Willowdean to try and be closer to her mom. These intertwining motives for the basis of the story already make it a million times better than Insatiable.

Now I’m not saying that the writing or plot in Dumplin’ is ground-breaking – it’s a heartfelt, cheesy teenage movie. But that’s what it’s meant to be. It’s meant to be a regular teenage story about finding yourself while also making a point that plus-size girls can be main characters too. And what makes the story even better is that, initially, Willowdean doesn’t think she can be the main character. She doesn’t think she can genuinely enter the pageant and so she joins it under the veil of a protest. It’s only after an emotional journey guided by drag queens and soundtracked by Dolly Parton that she accepts herself for who she is.

The main issue with Insatiable is that it tried to do something different and failed miserably. Instead of focusing on the idea of accepting yourself for who you are, it pushes the idea of forcing yourself to change and then exacting revenge on those who shamed you. Yes, the fat-shaming students in Insatiable deserve to be punished. However, it would be much more interesting (and a little more Mean Girls) if Patty remains the same weight but gains friends, a support system, and confidence as she exacts revenge. Not to mention having Patty played by an actually plus-size actress (like Danielle Macdonald who plays Willowdean) would make the overall story much more relatable and accurate. Because while Insatiable is framed as an attack on fat-shaming, instead it is one of the most powerful, poisonous attacks on overweight girls that I have seen.

Besides the focus on plus-size girls, there is also a focus, albeit small, on LGBTQ characters. In Dumplin’ there is a supporting LGBTQ character called Hannah Perez who joins the protest in heels, has a few funny one-liners, and not much else. However, while she doesn’t get too many moments in the spotlight, she is played by an actual LGBTQ actor who identifies with both she and them pronouns: Bex Taylor-Klaus. Hannah could and does deserve more time in the spotlight. However, her lack of time on screen is somewhat made up for by the drag queens who help prepare the girls for the pageant. They act as mentors for the girls and the montage that ensues is one of my new favorites. It’s heartfelt and sweet, over the top and glamorous, and the comparisons between pageant and drag queens are very true and funny to see with one of the drag queens dashing in at the last moment to help Rosie with a fashion malfunction.

In Insatiable, however, the LGBTQ representation is…strange. We start by learning that Patty’s best friend, Nonnie, is gay and has a crush on Patty. A few issues with this the main one being that strange, straight assumption that gay people are attracted to every single person of their sexual orientation. Another is why does she not fall in love with Patty until after Patty loses all the weight? Wouldn’t it have been sweeter if she loved her all along? For who she is?

And while it’s good that Insatiable has LGBTQ representation backstage with its bisexual creator and, well that’s pretty much it…. representation is not always good. While the creator, Lauren Gussis, defends the writing as satirical commentary, the 232,000 people who signed the petition to have the show taken down definitely disagree.

To conclude this rant of preposterous proportions: watch Dumplin’.

Because while Dumplin’ has a similar premise to Insatiable, the delivery is completely different from one making you smile and sing along to Dolly Parton and the other making you question your Netflix subscription.

If you want to watch the trailers yourself: 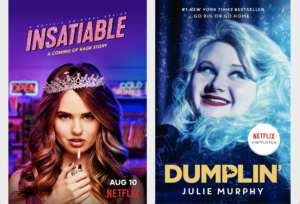