I know you had a rough time Cry Baby, but please don’t cry your eyes out.

“Someone’s turning the handle to that faucet in your eyes they’re pouring out where everyone can see” – Cry Baby, Melanie Martinez 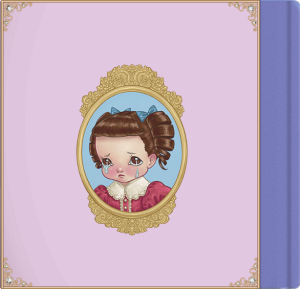 This album has been out since September and I never really got into it. It seemed like just another album that mixed pop with punk. But then, after listening to the album countless times I realized that the album is not your average Pop Punk, but a new take on Alternative music. I also realize that every song tells a different story– both from Cry Baby’s perspective and about her. Not everyone’s life is a picture perfect world, and those whose world seems like that on the outside is hiding something on the inside.

So what’s so special about this album?Let’s take a deeper look into some of the songs.

Cry Baby is the introduction to the entire album and the character Cry Baby. A girl who wears her heart on her sleeve. She has had a lot of losses in her life and has carried them for as long as she can remember. She takes everything to heart and this is what makes her emotional and her crying is all you see. Which is why they call her Cry Baby. Dollhouse introduces Cry Baby’s family and all of the problems that family has. This song along with a lot of the others that follow, hint at the story that the next song will tell. Dollhouse tells the story on how their family pretends they are perfect in front of others, but when they are home, behind all closed doors and curtains everything is not so perfect. Parents fight and lie to one another, their son smokes, and Cry Baby tries her best to remain uninvolved.

Sippy Cup revolves around Cry Baby’s mother. Her mother is a drunk whose husband has a mistress and when she catches them together, she ties them up and kills them due to all of the alcohol in her system that riles up her anger. She tries to hide their bodies, but when Cry Baby wakes up and happens to walk to the kitchen she finds the dead bodies, but just to her luck, her mother knocks her out and takes her to her room where she awakens and her mom filled her sippy cup with a syrup that made her forget what she saw. So when Cry Baby woke up for the second time she did not remember what she saw in the kitchen.

Carousel tells the story of Cry Baby going around and around, trying her best to catch up to a boy she loves. As she plays catch up, he plays around with her heart. Stuck on a ride that goes in circles, she can’t seem to move forward and is glued in one place as he appears and disappears, moving on with himself, but she can no longer move as she goes through the same thing like a broken record, or more like a carousel. Which leads to the next song Alphabet boy, who involves another boy, a boy who thinks he is better and smarter than Cry Baby, but she proves him wrong with that one clever song.

Soap tells the story of Cry Baby letting her crush know that she has feelings for him, but she always lets her feelings consume her and she ends up saying too much. Her crush takes in everything she tells him and does not know what to do, but will do something once he sees something bad happen. Soon she starts to regret everything she says and has to “wash her mouth out with soap”.

In Training Wheels Cry Baby finally finds someone she can love and can go farther into a relationship with. She falls in love with him and every single little thing he does. She is not ready for certain things that are to come, but she is willing to risk it for him. Of course she is not asking for marriage, but all she wants is a strong relationship, but all she needs to do is confess to him and that is when Pity Party comes into play. When she invites him along with a bunch of other kids to her party, not one person shows up and she thinks everyone is playing a cruel joke on her so she throws herself a pity party.

In Tag, You’re It Cry Baby gets stalked by a stranger known as The Wolf and soon follows her until he captures her and takes her to his home and keeps her hostage for his own pleasures. Everything changes in Milk and Cookies when she goes crazy from being held hostage and is sick and tired of being held that way, so when The Wolf leaves the door unlocked, she sneaks out and makes cookies and gets a glass of milk for The Wolf. When The Wolf ate the cookies and drank the milk he did not realize that they were poisoned and he died. With his death, Cry Baby was able to escape.

At this point Cry Baby does not care anymore, so she when she crushes on someone and realizes that he has a girlfriend, she just takes him away from her. Though the girl starts to get annoying and Cry Baby tells the boy to shut her up. Cry Baby knows that he does not love that other girl and that she was able to take him away from her because he wanted Cry Baby anyways.

Cry Baby saw something appear on tv about a woman who has gotten plastic surgery and look amazing, but it is all fake. She thinks about it and wonders if plastic surgery is the only way for someone to actually love her and will that person stay with her is all that plastic in her starts to fall apart and she is no longer beautiful. Mad Hatter shows how crazy Cry Baby has gotten. She sees a Psychiatrist and think it is ok to be as mad as she is. Her imagination has gone wild and can not seem to control all of the crazy thoughts that run through her head.

These 3 songs are bonus songs in the deluxe version and are not included in the storybook that comes with the deluxe version, but I thought it would be fun to show you what they mean. In Play Date she is always chasing after a boy, and although he invited her over in the first place he never communicates with her. making her the one to put the effort in that relationship. Soon they do get together, but in Teddy Bear she loved to be with him cuddling with him and just being with him. Cry Baby starts to notice that when he talks in his sleep he says the bad things he does to her. She was not scared at first, but then she found odd things around their room and she started to fear him, so she ended up dumping him, but that did not stop him because he started to try and get her back to do her harm, but she manages to avoid it and meets someone else. In Cake the guy she met stopped loving her and treated her as if she were a piece of cake. He thought she was something that he could throw out. So she let him go and let him know that he should regret treating her the same way because she is not just a piece of cake, but the entire bakery.

The album goes as far to tell moments in Cry Baby’s life by using songs that seem innocent, but if you really listen to them, you will see the dark and evil things that the lyrics are trying to say. I do highly recommend this album, because once you will listen to it your heart just might warm up to Cry Baby, she truly has been through alot in her lifetime.