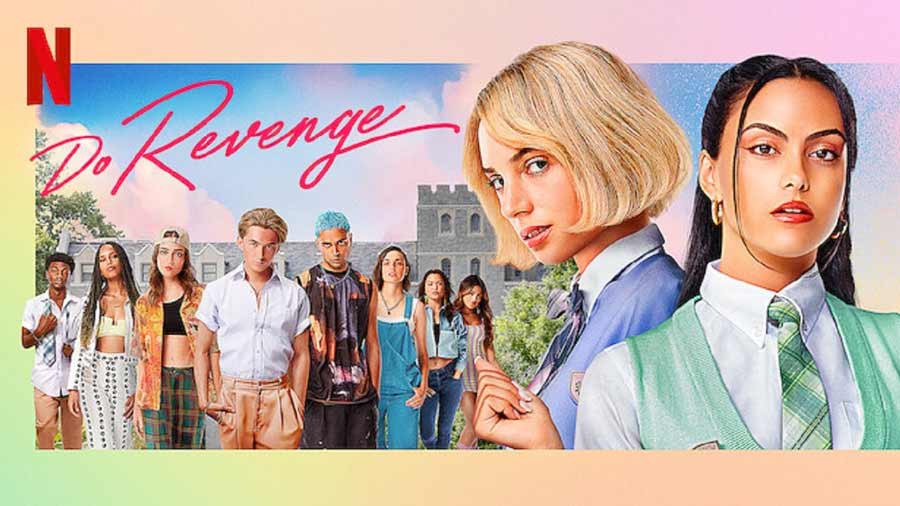 Courtesy of “The Red Ledger”

On September 16th, Do Revenge was released. After seeing countless videos mocking and praising it, I decided to form my own opinion. Before viewing, I put together a checklist in my head of what makes a good movie: great character design, a cohesive plot, and originality. Would Do Revenge pass the test?

In the first act of the film, we are given the plot: Drea (Camila Mendes), high school queen bee, with a seemingly perfect life and future, gets betrayed by her boyfriend. She becomes unlikely friends with transferring senior Eleanor (Maya Hawke), who is haunted by her past. Throughout the film, the two of them work together, pulling increasingly elaborate stunts to take down their enemies.

The film mainly takes place at Rosehill High. This truly beautiful campus—actually Oglethorpe University in Brookhaven, Georgia—is one of the few things I liked about the movie. A second were the outfits. I thought the costume design was superb. Drea wears form-fitting, flattering dresses, while Eleanor hides in baggy t-shirts, highlighting the two protagonists’ differences in personality.

Unfortunately, this is where my praise for the film ends. This movie is essentially a tweaked version of Mean Girls—which I love—, and the characters in this film are downgrades of those archetypes; Drea is cut out of the same mold as Regina George—the manipulative ruler of her school—and Eleanor is a cloned Cady Heron—the new girl who befriends the queen bee by pure luck. For both of them, there are two shallow romances that follow the same arc: love, fight, ignore, make up. Their characters do change, but the fact that it happens so late in the movie, and that those differences often get forgotten in the script, shows that the characters are just shells, not real people

The most fleshed-out character in the whole movie is Max (Austin Abrams), Drea’s boyfriend. He is the only character with dreams and pain; although he rules over the whole school, he wants none of it—his dream is to become a photographer, and travel the world. This is illustrated via the many photos he’s taken that decorate his room. Personally, I was happiest with his character, although his thoughts and feelings often did not reflect his personality. I did feel as though the writers didn’t utilize his desire to break free from Rosehill’s status quo, and craft a different ending. His motives as an antagonist seemed unfounded, to say the least.

The plot is easy enough to follow and the pacing, though uneven, still delivered the plot in a clear way. However, I really wanted to see something original from this movie in terms of plot design. I stayed for Max’s redemption, but the twist is predictable for anyone who’s seen a lot of high school movies. The acting is good; however, the dialogue is often overly dramatic for how low-stakes the situation actually is. The movie is hand-fed to you on a silver platter, which is something I’m just not here for.
If you are someone who likes high school dramedies, you might like this movie. Or at least, the scenery. But if you only have time for one movie, watch Mean Girls instead.