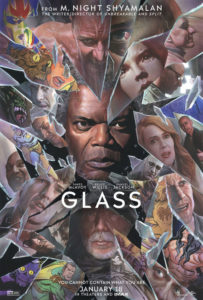 On January 18, 2019, the sequel to M. Night Shyamalan’s 2000 film “Unbreakable” and 2016’s film “Split” hit theaters. We have all been reunited with our hero in a green poncho, The Overseer (Bruce Willis), the brilliant mind Mr. Glass (Samuel L. Jackson) and the new powerhouse the Beast (James McAvoy).

If you haven’t seen “Unbreakable” or “Split” I highly recommend you view those prequels first. However, if you just want a quick refresher on both films: “Unbreakable” follows the story of David Dunn, a man who can’t feel pain, so he can go through things like a train crash and come out without a scratch. Dunn soon faces a new type of enemy: Mr. Glass. He has brittle bone disease, where the slightest touch could break him.  However, he possesses a powerful intelligence that puts Dunn into a series of puzzles and has him running around Philadelphia in a frenzy. In “Split,” three girls are kidnapped by a man with dissociative identity disorder (more commonly known as multi-personality disorder) and he begins to reveal a new violent personality, referred to as the Beast.

First up: We all know that M. Night Shyamalan’s films are notorious for being filmed in every corner of Philadelphia. This time the film is centered around South Philly where I have lived all my life. It is always a thrill to see things being filmed in my area. Once while walking home I actually witnessed a shot from the movie right before it was filmed! While watching “Glass” I kept thinking “Woah, that’s the way I walk to school!” and “There’s the Melrose diner in the background there. I used to eat there all the time.” Each recognized place was a jolt of lightning running through my body.

What struck me most about “Glass” was its new and incredible depiction of mental health. This doesn’t mean that overall it’s a good thing. The personalities living within James McAvoy’s Beast persona is an attempt to prove that people with mental disorders exist and that they’re spectacular. Unfortunately, the Beast’s only way of doing this way is through violence, more specifically eating people and crushing them with his bare hands.

David Dunn, or the Overseer, wants to show the world his abilities too, but in a peaceful way. He disagrees with the Beast and Mr. Glass’ ideologies. Rounding out the cast is Sarah Paulson, who plays Ellie Staple, the doctor assigned to examine these fascinating minds. She begins to decipher these inconceivable beings and their powers.

The relationship between the three main characters is something like a comic book. Observing the Beast and the Overseer is similar to watching Batman and Superman. You support them both when you watch them fight, even though their beliefs about how to protect the world are completely different: one who wishes to remain a mystery and the other who wants to be shown in order to be understood and respected.

Mr. Glass is the mastermind or the guy in control of everything even though we don’t know it. Each of the three main characters has a different companion as well, to demonstrate a different relationship for their character. It’s a way for Shyamalan to show the heroes’ alter ego. David Dunn and his son, Mr. Glass and his mother, The Beast, and his best friend. It’s easy to connect to these relationships in particular because the actors did a great job of illustrating the language in a way that feels both natural and real.

Samuel L. Jackson especially stood out in this film because of the delivery of his lines. The scene where he speaks to one of the personalities within the Beast is enchanting. One of the personalities is a nine-year-old boy and Jackson is able to say his lines in a way that sounds like he’s talking to a little boy and telling him that he truly is a hero, even compared to the raw power of the beast.

I wasn’t familiar with McAvoy at all and never saw a film with him in it besides “Split.” His performance of all 24 personalities is too real. It truly feels as though there are 24 different people in one room, each with their own quirks and ways of dressing. This is also credited to Shaymalan’s directing and writing.

Though it wasn’t a solution and even added to the stereotype that people with mental health are violent I believe that it empowered these neglected minds. Shyamalan takes ordinary Philadelphia, a place with huge neglect on the mental health community and tries to make Philadelphians and all that see this film understand that we should try to look at this community not as outcasts but as people with abilities we just struggle to understand. For a lack of a better word, they’re superheroes.