Sometimes too much is simply too much.  Perfectly effective modest ideas or plots become overwrought if excessively embellished.  That is exactly what Peter Jackson and the producers of The Hobbit, the Desolation of Smaug have done with J. R. R. Tolkien’s wonderful fantasy novel.  It is surprising how the same director could so masterfully realize Tolkien’s epic trilogy a decade earlier, yet stumble so badly with this story, the second in a planned trilogy, that is its loose prequel. What is even more astounding is that in spite of this major criticism, The Hobbit is well worth seeing at a theater near you before it goes into DVD distribution.

The book, The Hobbit, was much lighter and more fantastical story than the epic novel, The Lord of the Rings.  There was a fairy tale quality in the recounting of the quest of Bilbo, the dwarfs, and the wizard Gandalf to take back the hereditary city on the lonely mountain from the dragon Smaug and Bilbo’s discovery of the Ring of Power.  The main problem with this film was Peter Jackson’s attempts to expand this very appealing novel into three full-length films to make it a trilogy prequel to The Lord of the Rings.  This movie and the one before it, becomes bloated and frenetic in Jackson’s efforts to expand the story to make every connection possible between the Hobbit and LOTR.  By doing so, the director loses some of the most appealing aspects of the book.

The first problem is with the expanded story.  One of the things that made the LOTR movies stand out is how closely he followed Tolkien’s original story. Yet with The Hobbit, it is almost like Peter Jackson has completely rewritten the original story. He felt the need to add a lot of side stories to the movie, such as the Orcs and the love triangle between Kili and Tauriel (who did not even exist in the book). These stories can both add to the story and distract us from the more relevant events occurring.  Likewise, some of the links between The Hobbit and the LOTR seem a bit unnatural and unnecessary.

The other criticism with the movie is with its frenetic pace.  While I like action and epic battles as much as anyone, The Hobbit overuses the tool of CGI and face paced action. With all the unnecessary chases and battles, the movie feels bloated and, at points, the message gets lost in the stretched-out action sequences.  Bilbo’s engineering of the dwarfs’ escape from the elves’ castle was better as a tale of resourcefulness and suspense, that a white water rafting experience with life or death implications.  It is just too much to be enjoyable.

Yet I did not leave the theater unhappy. The movie clearly was appealing to all audiences, even those who did not watch The Lord of the Rings or read the books. Peter Jackson loves Tolkien’s novels and it shows.  Also, in general, the casting is highly appealing, both with the characters who play principle roles in the LOTR and with Martin Freeman who plays the younger Bilbo, Richard Armitage the dwarf king Oakenshield, and Gandalf played by Ian McKellen could not go unmentioned.  And then there is the dragon Smaug voiced by Benedict Cumberbatch – a true tour de force of imagination – dominates the movie and is what renders much of my criticism unimportant. 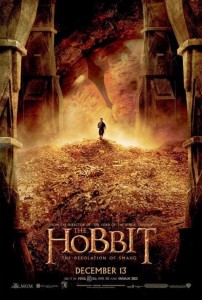 I think that The Hobbit is definitely worth watching and forming your own opinions. Despite any criticism that I have it is very enjoyable and well made. It is clear that Peter Jackson is dedicated towards making this movie appealing to all audiences.