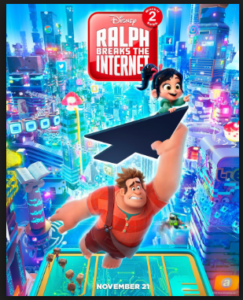 In Wreck-it Ralph we followed Ralph as he traversed the arcade world. In Ralph Breaks the Internet we follow Ralph as he traversing the internet. Surprise: the second story is horrible.  Make sure you’re strapped in for what is an entire two hours of references and nods to old memes.

The movie begins with the three writers who helped create the movie and all of its jokes. Right then and there I knew that the movie would be underwhelming. When you’re creating a movie that is about the internet and a critique of modern society, you actually need the people who are on the internet constantly, by which I mean teens. No offense, but the creators are a bit older and they still laugh about extremely old memes like the screaming goats which made me sick to my stomach. But that doesn’t mean that the movie won’t get a few chuckles out of you.

The big issue that I had with the film was mostly the plot. In the first film, Ralph is a villain who wants to become “the good guy” which actually means that he wants to be accepted by the society he lives in. He ultimately learns to be comfortable with who he is, because he’s not as bad as he believes and if he really wants to change for the better he can do that by still being himself. And then we get the plot of Ralph breaks the internet.

In this one, Ralph’s best friend Vanellope fears that her game will be shut down so her and Ralph go into the internet to find the solution. The audience realizes that within the time between the first and second film that Ralph has become extremely clingy to his friend Vanellope and that Vanellope is tired of her arcade days and wishes to actually just live in the internet world. Pretty good so far right? Well shut up because it gets worse. Vanellope gets angry at Ralph for being too clingy and uses this as an excuse to escape into the internet world.

Without spoiling the ending the movie the moral basically is something along the lines as you can change where you’re from and who you are without ruining the relationships from your old life even though it’s hard to maintain both the old and the new.

This is a good realistic moral but the plot is just so over the place. At first, they’re trying to fix Vanellope’s game. And then they have to get money to fix the game so they start making videos. Then Vanellope spends half the movie angry at Ralph for trying to help her and being too close with her.

I sort of just sat in the audience like, “Who hates who and why should I care at this point?” And I don’t wanna hear that argument, “But life isn’t so black and white and that’s why the movies so all over the place because that’s how life is.” When you write you should try to find a way to lead the audience through the mess that is life, not just be like, “Finding yourself is hard and maintaining relationships is hard, buckle up kids.”

Ralph breaks the internet is good in the sense that it was able to bring a few jokes and an interesting concept to life. Although the overall message of the movie was executed poorly and seemed lazily written at times, I can’t help but feel as though the movie brought an interesting concept to life. However, it quickly turned into a wasted chance for a sequel that fails at tackling an issue that modern day kids will understand. When you see “Ralph Breaks the Internet” you’ll probably want to wreck the movie too.