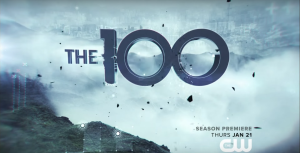 Today YA novel trilogies are very popular… and very generic. They often follow a set of cliches:  there’s a love triangle, the teens are always fighting to survive, there’s an oppressive dystopia, and eventually the books get made into a movie trilogy with the third book split into two parts.

It’s because of these cliches I was a little nervous about the new TV series The 100, which is based on a YA trilogy. What’s more,  the first episode seemed to make it clear that most of these cliches were going to be a regular part of the story. However, the series proved to be much better than I had originally excepted, with the characters forced to make some dark decisions in order to survive to the point that I questioned if they even deserved to live.

The story takes place about a century after a nuclear war which destroyed the civilization on Earth, forcing  the remains of the human race to flee the planet in a space station known as the Ark. With oxygen running low on the Ark, the council decides to send 100 teens to Earth to test if it’s habitable. Earth turns out to be perfectly fine for the teens; however, the radio was broken in the crash so they have no way to communicate with the Ark.

While the first half of the first season suffers from feeling like a post-apocalyptic soap opera with a love triangle and attractive actors, the series improves as it show the grim nature of the world the teens live in. The characters are forced to make some tough decisions, ranging from mercy kills to sacrificing three hundred people to potentially save everyone on the Ark. By the end of the first season, the characters prove to be complex and willing to go to extreme methods in order to stay alive.

The story feels similar to Lord of the Flies for the first season with its focus on survival and the struggle to form a society before focusing on the conflict between the 100 and native survivors living on Earth known as the Grounders. The Grounders live in a society lacking the much of the morals of the old world. This creates an interesting dynamic between the two groups in terms of leadership and society.

The second season expands on these themes and starts out strong by introducing a new society known as the Mountain Men on the post-apocalyptic Earth, showing the how the characters have grown since the first season, and getting an awesome intro. It’s here that the show improves on it’s flaws and really dives deep into its themes of leadership and survival.

Leadership is the main concept that forces the characters to make such dark decision and it’s interesting to see how this is justified by a need to protect their people. Clarke (Eliza Taylor) is the prime example willing to make a difficult alliance and compromise many morals in order to save 47 of her friends. Jasper (Devon Bostick) a light hearted character who rarely played a major role in the first season was forced to step up to act as a leader. One of the most interesting examples comes from Jaha (Isaiah Washington) who faces the difficult task of finding a purpose, once his leadership is no longer needed.

The Mountain Men act as the main antagonist of the season, living in a bunker and unable to go outside due to the radiation. While they appear to have a friendly and civilized society they are also forced to do terrible things to survive in a way that makes them seem both sympathetic and  cruel. It’s here that the show truly comes into it’s own and delivers an excellent season topped off with an unforgettable finale.

In conclusion, the show is surpassing the series it was adapted from, with a willingness to go darker and deeper into the characters and setting. The look at the moral choices and the consequence give it an interesting and dark story and the justification of the actions help add to moral ambiguity of the characters.

The third season of The 100 will air on Thursday, January 21 on the CW. The first two seasons can be found on Netflix.