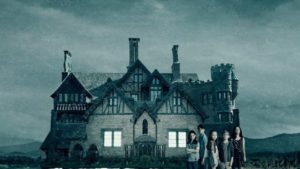 On October 12th, a new show on Netflix aired called, “The Haunting of Hill House”. The show follows the Craine family and their ghostly encounters over the course of twenty-six years. Over the first few days of the show’s release, articles started popping up on the internet about how the show was so terrifying that it had caused people to throw up.

When I read a snippet of one of these stomach-churning reviews on Instagram, I knew I had to watch the show. The idea of throwing up from fear didn’t really appeal to me, but I can never resist an outrageous review or reaction. I was just too curious.

As far as Netflix originals go, my favorites have been Big Mouth, Stranger Things, and Atypical. But all of these shows are more comedic, whereas Hill House is definitely more of a drama. So I was curious to see how Netflix would interpret a show like this. The show follows Olivia and Hugh Craine, along with their seven children, (Steven, Shirley, Theo, Nellie, and Luke) while they renovate a haunted mansion during the summer of 1992.

The first episode drew me in immediately with the unique format it uses. The storyline of each episode switches from present day to the past and isn’t in chronological order. In the show, a scene will be shown without context, and then episodes later you will figure what was going on in the scene. Throughout the show, Nellie is haunted by a ghost she calls “The Bent Neck Lady”, later Nellie hangs herself, and we find out that Nellie was “The Bent Neck Lady” all along.

This format makes the big reveals and twists super satisfying. Watching the show is like fitting together a puzzle, and it keeps you interested because you are waiting to see how the pieces will fit together in the end.

So, the big question: is the show is really that scary?

I would say no. As a high schooler with not much experience with horror movies, I found the show creepy, but not terrifying. There are few gory scenes, which I think might explain why some people felt sick from watching it, however, these scenes were not very graphic and were also quite brief. There are a few several jumps scares in the show, so keep that in mind before you watch it.

Overall, I think that The Haunting of Hill House is one of my favorite shows on Netflix.. I liked guessing what was going to happen next, and once I finished the show, I was left thinking about family relationships and how they affect you.

Plus, I didn’t throw up.