These ratings have moved online. This has been made possible by the app called Lulu, created by Alexandra Chong. 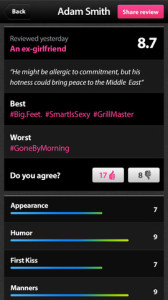 The app allows girls to anonymously rate guys based off their looks, personalities, habits, and hobbies.

This app was created in April 2013, and since then has amounted over one million users.

Many claim this app sexist, as girls are rating guys in a demeaning way. While others say that this app allows people to cyber bully.

An important thing to note is that while you are anonymous, you must log in through Facebook and be over the age of 18. As a result, the app has not taken off in high schools.

The purpose of the app was to be a way that women could share their thoughts and opinions with others, in a positive way. However the opposite of that has been achieved.

The app almost seems to be pro-cyber bullying. Girls are allowed to give hateful reviews, because there are no filters on the app. That is definitely not the intent, but it is what it has come to.

While Chong says that crazy ex-girlfriends, and girls only wishing to give guys a bad name are not a part of the app, that is far from the truth.

The app lets you rate guys anonymously, therefore anyone can put any kind of review about a guy. You can hashtag a guy with anything you wish. It is very easy to say cruel and negative comments about a guy.

This app is also creating a double standard. If guys were to make an app that rates women anonymously, women would become outraged and find it very sexist and degrading.

Hopefully the creator will come to her senses and get rid of the app before it gets more out of hand and continues to grow and prosper.

To all guys; watch out, you may be the next victim of Lulu. 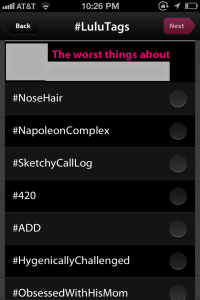