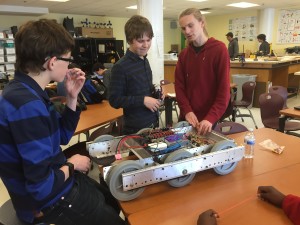 The Robotics Club has been a part of SLA for four years now, and after being founded by Mr. VanKouwenberg they are currently advised by Mr. Kamal.

The team met for their typical weekly meeting on a Tuesday. The meeting begins slowly as the group goes over what they need and the plans for the competition before splitting out to work on the various aspects of the test robot. The test robot is to for them to practice driving it around as they can only work on the main robot at the competition. A typical competition involves having the robot run a series of task within a time limit. For information on the robotics challenge this year, the description is here: https://www.youtube.com/watch?v=VqOKzoHJDjA.

“Our robot is mostly an intake bot to pull in ball and spit them out,” says Mitchell Berven-Stoltz, a senior who has been a part of robotics for all four years. “A key part of the competition is navigating mechanical defences and that is something our robot is excellent at as it is very fast.”

The team is very happy about with how far they’ve come and the work they put into the robot.

“What we do here is very advanced and I feel that I’m in a room full of the world’s top genius when I’m here” says Boubou Magassa a freshman. “I feel this place could help me learn and evolve more as a learner”

“We all feel really proud and confident it’s been a lot of hard work and it’s very satisfying” says Michelle Friedman, another senior who has been an active part of robotics since the beginning. “We’ve run the meetings better so people know what their doing, fundraising, all students are more skilled, freshmen are trained better.”

Tobi another full time senior claims the progress is from their improved organization. “We’ve had a rough three years but it’s gotten much easier with Mr. Kamal’s organization, we were really able to get everything together and do a great amount of work” he states.

With the seniors leaving this year, the team has made sure that next year’s team is prepared for continuing the club.

“Since I was a founding member, I am very proud of after three years or arguable failure we are doing very well and have a strong freshmen group to carry on after the seniors leave” says Mitchell

Michelle is also confident in the next generation claiming “There are a lot of freshman and a few juniors, we spent most of this year making sure the team is really strong without us.”

The team just got word that they made it into the District Championship. The competition takes place on April 14 and 15 and will be the last competition for the graduating seniors.