The school store is a cornerstone of every lunch period. Located across from the second-floor ballroom, the store is 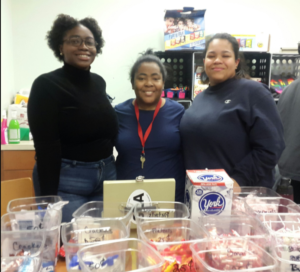 Since some students would prefer to not get school lunch, they rely on the store for snacks. Some students even go to the point where the snacks make up their lunch.

“I never get lunch on a day the school store will be open because I prefer the food there much more,” said Senior Saamir Baker.

If the store is not open, some students simply skip their meal. “When I don’t have the funds for the store, I just don’t eat lunch,” stated Senior Olivia Cooper.

In previous years, the school store would only be a bunch of bins of candy, chips, and little snacks. However, starting the 2017-2018 school year, those are still included although in a much more diverse and large quantity. Not only are there snacks that are considered junk food, healthier food options have been added.

Some of those healthy options are packs of applesauce, granola bars, oatmeal, and much more. However, students generally agree that most people purchase the less healthy snacks there.

“It’s a good thing, but it’s not like a healthy thing because that’s all people eat for lunch: chips, lollipops, and more. Although, it attracts people and the school is getting money so I think it’s good where it’s at right now,” said Junior Amelia Benamara. “I think if they do upgrade it in the future, they should add more healthy options in it.”

In the last school year, the store makes $150 a day on average. Since it’s open twice a week on average, this means the school store has made about four thousand dollars so far this year. All funds go to support student activities.

Last year, the store was open three days a week or more. This change is due to a large decrease in parent volunteers, not any disagreement between Ms. Baker and Principal Gerwer, which has recently been a rumor.

In the years prior, there would be a cycle of different parents who would volunteer to run the school store although this year consists of only one parent, Ms. Shareem Baker.

This can have some negative consequences such as the school store being closed on more days. Luckily, Senior Saamir Baker volunteers to help his mother out in the store. Along with him, there are other seniors who are consistent at volunteering in the store to help out as well.

Due to the closure, a rumor started that Ms. Baker and Principal Gerwer had some kind of disagreement. This is untrue.

Even with the school store being short staffed, they are always trying to incorporate new ideas. Two weeks ago, the both fried chicken and fries were made in the school and sold. This was a big hit with the students, even attracting a line that stretched from the store into the ballroom.

“That decreased the lunch numbers by like a hundred kids. The problem is there are certain standards when you prepare food at a school,” said Co-Principal Aaron Gerwer.

Many students appreciate the effort that is put into the store.

“The people who work the School store are 100 percent parent volunteer, be nice to them!” said Excellence Coordinator Jeremy Spry.