For most students, writing a play seems like quite an ordeal, but Senior Byshera Moore-Williams proves that it really does pay off.

As a sophomore, Byshera wrote a play for History Teacher Joshua Block’s class as an assignment.  After submitting her play to Philadelphia Young Playwrights, for the Annual Playwriting Festival, she was surprised to have her play chosen to be performed by Temple students majoring in theatre. The play that she wrote sophomore year went on stage this fall.

There is more to the process of preparing a play to be performed on stage than one might think. It may not be for the weak of heart, but that didn’t stop Byshera. Her dedication to her work carried her through.

Byshera explains, “If you win you go for three weeks, September 23rd to October 10th is when I went. You go to at least two rehearsals each week and you get feedback from your actors and your directors, to make edits. You pick music and that kind of stuff, and at the end of those three weeks you get to see your play on stage.”

Her play was about a child who suffers from obsessive compulsive disorder and issues from his past including his parents not being there for him and drug use.

“They showed us three plays that were each written by students. We were there with other schools like Masterman, and the plays were really good. They were performed by students who go to Temple, learning the theatrical arts. A lot of the plays were written about actual experiences.”

Byshera did not always think she would be interested in creative writing, and she came to SLA more interested in the sciences. After the experience of the play she is enthusiastic about studying writing in college. She is applying for a scholarship and her first choice is Fordham University in New York.

“I am applying with english as my major and creative writing as my minor, since there is no playwriting major. I wanted to go into science, but then I just ended up liking writing. This experience changed my ideas.” 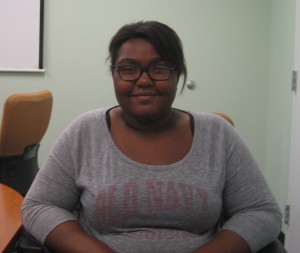