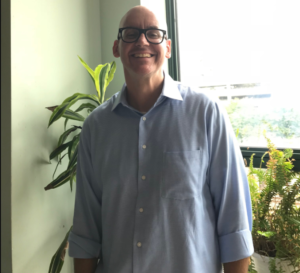 It’s a Monday morning. Tired children trudge up the staircase to get to the fifth floor for their first class. They are greeted at the door by a bright-faced Michael Clapper, the new History and English teacher at SLA Center City, who asks the questions about their weekend. Kids walk into his classroom, ready to start the day.

Mr. Clapper grew up in Reading, Massachusetts, a small town north of Boston. He attended a boarding preparatory school. This school provided him with many opportunities and the students there had what he describes as an “intellectual firepower.” But, he said it was very different from SLA.

“There was almost no diversity there,” he said. “And also, at SLA, curiosity extends to an intellectual, social, community level. That’s what I love about it.”

After high school, he attended Macalester College, a small liberal arts college in Saint Paul, Minnesota. The broad-based, diversified education he received there well-prepared him for the variety of jobs that would come after college.

From Minnesota, Mr. Clapper moved to Philadelphia ultimately in pursuit of his Ph.D. in American History. The move to a big city, like Philadelphia, made a big impact on him.

“The transition from a suburb to a Philadelphian environment was a difficult one, but I really enjoy living in the city,” Stated Clapper.

Along with living in the city came many different job opportunities. Clapper has worked as a park ranger, a social worker, a drug and alcohol counselor, and a bike courier. His favorite part about the city is the diversity and the ability to walk anywhere.

Clapper started teaching in the late 90’s at Simon Gratz High School where his love for watching kids learn and grow began.

“Teaching is closest to who I am,” he said when asked why he decided to become a teacher, “and, I like to read, write and argue.” He taught students History and English in many schools across the city.

In addition to teaching, Mr. Clapper was a part of the founding team of The Workshop School. another project-based high school in West Philadelphia. He and four other people worked on this school from the beginning, making sure students had a different approach to learning than conventional high schools. Although it’s different from SLA, he says it’s still a great school.

While teaching in Philadelphia, Mr. Clapper began to play Ultimate Frisbee. This is where he met Chris Lehmann, the founding principal of SLA. Mr. Lehmann told him about his idea of SLA and shortly after Clapper was hired to teach 11th-grade students History and English.

“There is power in the way people work,” said Clapper. This is why he was interested in the SLA model.

Mr. Clapper fits just right in the SLA community. English and History Teacher Joshua Block, who now works alongside Mr. Clapper knows this from personal experience — he was Mr. Clapper’s student teacher many years ago.

“His vision of education and the way that he teaches fit with SLA and what we’re trying to do as a school.” He also describes him as a goofball and incredibly smart,

His students all also love him. Freshman Ellis Measley, a Clapper advisee says, “He has made me feel welcomed by mostly being nice and making things chill… Overall I am very happy he is my advisor.”

Michael Clapper lives in West Philadelphia with his wife and two children. At home, he likes to read, write and cook with vegetables he grows in his garden. If you’d like to keep up with Mr. Clapper you can visit his blog, mrclapper.com. This blog has been around since 1997, where it was originally a Grey Matter site.

“I like keeping track of the way kids are inspiring me,” he says about his blog.