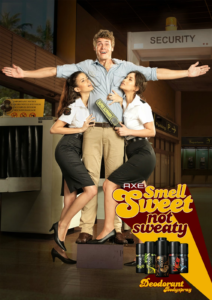 Axe body spray; a scent that seems to have followed me from middle school to my sophomore year of high school and if you have ever seen an Axe commercial, it is easy to see why. Axe is advertised as a chick magnet, a magical tool that can make even the biggest loser irresistible to women. And for some reason, these commercials actually seem to work. They present the idea that women want hyper-masculine men and then bring out the product that can single-handedly turn anyone into a walking Foreman grill.

So the real question is, do girls even like Axe?

The short answer is mostly no. I mean, I don’t. After having someone mistakenly spray it into my face in middle school, I haven’t really cared for it. The thing is, I don’t mind men’s cologne in general, but I think that something about Axe encourages boys to drench themselves in it.

There aren’t many self-care products on the market specifically for men, and the ones that there are (like Axe) seem to hyper-masculinize themselves as a way to counter the idea that taking care of yourself, or caring what you look (or smell) like is a feminine thing to do. Axe is a company that obviously profits off of toxic masculinity and the insecurities of young men, and they have been called out for it many times. In 2017, Axe launched a campaign focusing on toxic masculinity and how it affects young men. While I totally agree with this campaign, I still think that Axe benefits from the messages of their earlier ads.

Take their scent “Dark Temptation”. The scent claims to be “chocolate scented”, and that it will attract women because women love chocolate. Or “Vice” which claims that it turns “good girls bad”. Axe’s commercials go from exaggerated, to outright crazy. One commercial claims that Axe is “Anti-Invisible Spray” for men who are ignored by women, while another shows a high school teacher coming onto her student once he uses Axe.

Axe has completely stopped airing commercials, so unless someone has a habit of checking their website, they would have no idea about this anti toxic masculinity campaign. In this way, Axe has a backing if someone claims that the brand is sexist or profits off of men’s insecurities, without actually changing the kind of messages people associate them with.

“I think that is it sad that fragile masculinity makes men feel like they have to be obnoxious and overpowering- like Axe,” Says Sophomore Kofi Kohl.

From a young age, men are told to be assertive, powerful, and strong. They are told to speak loudly and to not allow themselves to be ignored. Axe body spray seems to be a way that young boys make themselves more noticeable, even the commercial advertises itself as “Anti-Invisible Spray”.

Sophomore Mo Kelly remarks, “I think that boys think that Axe makes them strong. Even the name Axe is like strong, and they think that if they wear something like Axe they will be cool and strong too.”

Over the past few weeks, I have been asking all my close friends what they think about Axe, just to see what the general population of SLA had to say about it, and they all had the same answer, they didn’t like it. So how can we explain the constant lingering smell of Axe that fills SLA every day? The truth is that only 3 or 4 people need to wear it for the smell to make its way around the school.

So the next time you go to spray yourself with “Dark Temptation” or “TWIƧT” (yes, it’s really spelled like that), remember the connotations that come with wearing Axe, and also remember that no one else really likes it.