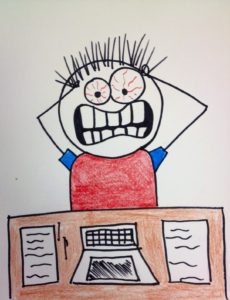 SLA has a greater amount of work given to students compared to a common public schools. For transfer students the workload is a big change for their high school experience. It is a great transition from their previous schools.

“The work here is more heavily laid on, but at the same time the teachers are easy graders. It’s more to do, but there’s less of a chance that you’ll fail,” said Castillo. SLA’s workload has many different effects on students. Some see it as beneficial to them, others not so much. “SLA’s workload makes me feel terrible. When I get five assignments on the same day from five different teachers how am I supposed to feel,” said Castillo.

Sophomore Maddi Etxebeste came to SLA from outside of the United States. Etxebeste previously attended Collège Sainte-Marie, Saint Jean de Luz, a private school in France. “I can handle the workload because I can stay up late working and I have time after school to do it,” said Etxebeste. Etxebeste has a comfortable way of handling the workload, although sleeping would be more ideal than working late at night.

Benchmarks aren’t something that most students look forward to, whether transfer or not. Castillo definitely doesn’t look forward to the quarterly benchmarks. When asked about them, she had an intense response:  “Those suck! At my old school I was used to little projects and then a final at the end of each quarter, but at SLA it’s this three week project right in the middle of college applications and you just have to do it.”

Though there are different ways to cope with the workload, their feelings can be shared. “Sometimes it makes me feel stressed because I don’t know how to do it or because I have too much work due on the same day,” said Etxebeste.

There are also some exaggerated feelings such as “By the time I get a lot of work I’m dead inside,” Castillo remarked.

In conclusion, students transferred to SLA for a reason. The workload is a part of the package that they have to deal with.