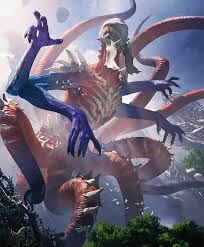 Explained simply, Magic: The Gathering is a trading card game in which you play with a deck of 60 cards, and try to kill your opponent. While it is not a game for everyone, I have been playing for a long time, and have recently started to play competitively. For the those who do not play, this article will hopefully give you an understanding of the appeal of the game. For those of you who already play, you may find my descriptions useful.

I’ve been playing Magic for almost seven years, and in that time, I’ve seen a lot of nasty competitive decks move through the formats. However, I’ve never seen the modern format as warped as it currently is.

As an almost exclusively modern player, I’ve played a fair number of decks, and played against many more. Many do not love modern as much as I do, but it is still a fun, relatively accessible format for competitive play. This is why I hate to see the modern format demolished by the Eldrazi archetype.

The Eldrazi deck started out as a super-budget brew. Using the underrated Eldrazi lands (Eye of Ugin, and Eldrazi Temple), the deck was able to cast cards like Blight Herder and Oblivion Sower early in the game, in order to ramp into Ulamog, the Ceaseless Hunger. The only cards whose price was of note being Inquisition of Kozilek, and Ulamog. It was a very cheap, very efficient way to play the game, costing only around $150, with the average price for the format being somewhere between $500-$1,000, sometimes even reaching prices upward of $2,000. Then, it began to take off. Prices were in flux as the deck spiked in popularity, and it single-handedly pushed many decks out of the format, seeing as it had built-in graveyard hate.

However, no one could have been prepared for the Pro Tour, the largest MTG professional tournament, held annually around the world. After the release of the new set, Oath of the Gatewatch, the deck exploded in its power level. With new cards like Eldrazi Mimic, Reality Smasher, and Thought-Knot Seer, the deck took off, and made not just a dent, but put a hole in the format. The deck was obscenely fast, and hit very hard, and, as a result, many other decks became unplayable, as they could not win against Eldrazi. Many people who invested time, energy, and money into their cards suddenly had no way to win the game.

So, what is the solution? Many are calling for the banning of either Eldrazi Temple or Eye of Ugin. Some call for both. Some call for other cards to be unbanned. Ultimately, we won’t know for a while, but, until Wizards of the Coast does something, we are stuck dealing with this borderline-unplayable game.