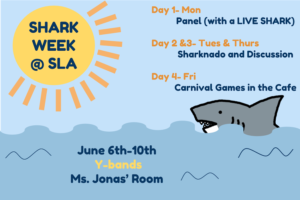 This year a group of SLA students are putting together a four day long Shark Week. Taking place in Ms. Jonas’s room during Y band, the event will run from June 6 to 10th (no event is being held Wednesday due to ILPs).
The first event will be a panel held on Monday, with Amy Penney from Adventure Aquarium, Jennifer Totora from the Independence Seaport Museum, and Alanna Durkin from Temple University discussing shark health and conservations. Additionally a real shark from Adventure Aquarium will be coming for people to touch.
Tuesday and Thursday will involve the screening of two shark movies Sharknado and Shark Tale and a discussion about our perception of Sharks.
Friday will have carnival games (Pin the Fin on the Shark, Lollipop Tree, and Shark-Bowl toss) with the chance to win a big stuffed shark as well as a bake sale fundraiser for the WildAid Shark Savers program in the cafe.
“With our events throughout the week, we are able to bring awareness it different ways to SLA” said Imani Weeks one of the organizers for the event. “The panel discussion ensures people are more informed and get to hear what experts have to say about shark week. The movie days show how sharks are presented in different ways, sometimes it could be in a good way and sometimes it can be in a bad way. The carnival games makes shark finning memorable because they are having fun around the topic.”
The idea to hold a shark week at SLA came from a semester long Inquiry to Action project from American History. A group of junior decided to focus on shark finning as their inquiry project and to raise awareness decided to host a Shark Week event at SLA.
Junior Kia Dasilva is another one of the students involved in setting this event up and is extremely passionate about changing perceptions of sharks.
”I feel that it is important for SLA to celebrate Shark Week because more people need to become engaged in discussions about how to address shark health and shark conservations” she said. We need to take a stand against this issue in order to protect one of the most important sea creatures.
Sharks serve as a key part of the ocean’s ecosystem being the top predator but their low reproduction rates and the stigma that movies like Jaws have given sharks. While sharks have not yet been added to the Endangered Species list, the lack of regulations and industrial fishing over the past 60 years is slowly driving the sharks to extinction.
Kia is very proud of her work in organizing this project and excited to see how the SLA students will respond.
“To me, Shark Week is the culmination of a semester’s worth of planning and researching. It is a fun end to the year, and a summary of the different ways that SLA projects can really have an impact” she said. “I’ve learned so much about coordinating and working with my group to make this dream a reality.”