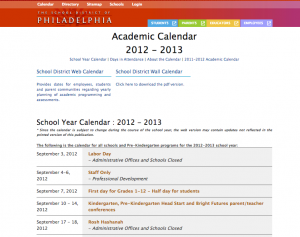 Out of the 10 weeks in the first quarter of school, there has only been 4 full weeks of school, Monday through Friday, or 3, if you are a senior.

School started on a Friday. The following week was the first of the full weeks of school. The week after was interrupted by Rosh Hashanah on Monday and Tuesday. On the Wednesday, the week after, was Yom Kippur. September ended having only one full week of school.

October had a promising start. For the first week of October, there was school everyday. Although a power outage on Thursday, the 4th, ended the school day early, Columbus day was the first day of no school in October.

The week of the 22nd in October was another full week. But Hurricane Sandy prevented school from occurring the following Monday and Tuesday.

November 6th marked another day of no school for Election Day. But teachers made sure take advantage of it by sending out students to interview voters. Veterans’ day was observed on Monday, the 12th, making it another week of school that was unfull.

In total, there have only been four full weeks of school for students. If you are a senior, than it’s always been three weeks.

The inconsistency of full weeks of school has been affecting the work of both students and teachers.

On the other hand, the days of school have helped students with their workload.

“It’s made it better because I’ve had more time to work on things.” said Senior Andora Myftaraj

With Thanksgiving holidays on the 22nd and 23rd, the first week of quarter two won’t be a full week either. If this trend of no school continues, students and teachers will be penalized by having days taken away from Spring Break. However, reportedly, if the school district declares these days as emergency days, it may not affect our Spring Break afterall.

In short, the lack of consistency has affected us all. As Senior Jenn Wright stated,  “It’s been hard to get into a routine.”