Unsurprisingly, Trump won both the Nebraska and West Virginia primaries, but there was an interesting turn of events for democrats as self-professed “democratic socialist” candidate Bernie Sanders took the majority of delegates in West Virginia. Senator Sanders, of Vermont, has faced an uphill battle competing against established former secretary of state Hillary Clinton; the media has written him off as a lost cause since Super Tuesday and the constituents among which Sanders is popular are the largely unpredictable American youth. However, following a victory in Indiana two weeks ago, Sanders has once again triumphed in West Virginia- proof to his supporters that all is not lost.

While Clinton has the clear lead in total delegates (which include unpledged “Superdelegates”), these votes, though historically casted for establishment candidates, could sway either way depending on the popular vote. The role of superdelegates has never been so critical as in this election, and we have yet to see how they will react. For that reason, I have included only pledged delegates in the infographic below. 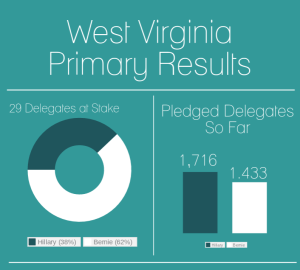 It’s clear that Clinton is winning, but by how much? Not a substantial enough amount to guarantee candidacy. In fact, the Huffington Post calculated that if Sanders does well in the remaining primaries (much as Barack Obama did back in 2008), he has a legitimate shot at swaying superdelegates and becoming the democratic party nominee.

Something that voters will have to consider in such a close race is whether or not they truly believe their candidate has what it takes to be not only a successful president, but successful in the general election. Democrats (along with many Republicans and Independents) have agreed that one of the priorities for this election is to defeat eventual Republican nominee Donald Trump.

Whether Sanders or Clinton is the right choice depends on you. If you’re a democrat, comment your thoughts!