Cyber bullying has been around since the advent of the internet, but its effects have increased in recent years  from the access to free speech on any social media sites.

At its worst, Cyber bullying can have deadly consequences. Recently, Howard high school in Delaware just faced one of the most tragic doses of such a plague. Sophomore Amy Joyner-Francis was killed on April 21st, after an altercation with a few of her peers. It was reported that the feud began over a boy, which started as slight jabs, rude remarks, cyber and physical bullying, and ultimately, the final confrontation. The defendants say that Joyner-Francis’ death was an accident–that she hit her head on the sink during a fall–but the fight definitely started with events on social media.

People all over the internet have been showing their sympathy and giving condolences to the lost girl’s family, but that isn’t enough to erase the unfortunate, yet very real fact that a girl is dead and a family is in mourning.

With this issue taking place so close to home, many are wondering: could something like this happen at SLA?  After surveying 158 students at SLA, SLA Media has been able to determine  just what people think of the cyber bullying epidemic and how they felt about the Howard High school tragedy. 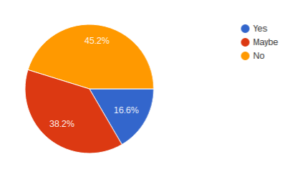 “I find that bullying isn’t much of a problem here but I’m not at liberty to say anything else,” says one of the staff members.

and 79% would ignore the situation and move on. 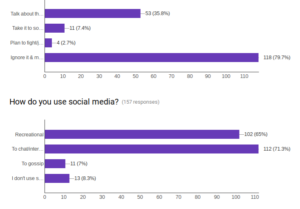 Very few students opened up about any specific stories of cyberbullying, although sophomore Aidan Williams shared a story from before when he attended SLA.  but says he experienced a very different form of cyberbullying; bullying through e-mail.

“Someone got a hold of my e-mail and I was getting weird messages from a ‘superstalker454@aol.com’. I was in fourth grade and really scared, so I deleted them immediately,” he said.“About a month went by and two more emails came, and were saying inappropriate things about me.”

When explaining how he was able to keep the e-mails from continuing, he said that the first place he went was to his parents, then his principal. °They held a meeting and the girl eventually apologized to me.”

According to the numbers, bullying is still somewhat a rare occurrence at SLA. Students from other schools claim that there is a lack of control over altercations, and this shows that a lot of schools aren’t handling the issue properly, therefore causing an untreatable epidemic to take place. I learned that in a lot of environments, they don’t necessarily feel that they are safe from bullying which should be one of the biggest priorities of the school and staff.