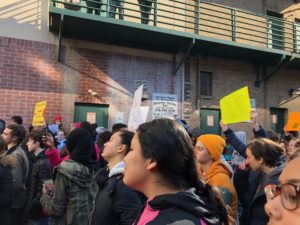 I wish learning about the Florida shooting had been a shock. Instead, I felt an overwhelming sadness for the lives that were lost and numbness towards the current state of our country. At first, I had thought that this issue of gun control was never going to fix. I feared that the US would be stuck in an endless loop of discussions about the problem with no solutions actually being acted on. When I heard that the students that survived the Florida shooting were organizing walkouts and protests and saw the support from kids all over the country I had a mixture of pride and anger. I was proud of my generation’s awareness but also angry at the people in power who have the ability and resources to end this problem but refuse to. It’s ridiculous to me that children are the ones who have to pick up the slack from adults. The very same adults who promised us a bright future, while at the same time allowing events that can prevent kids to from even having a future to keep happening.

To me, the walkout seemed like a step in the right direction. Kids walking out of class and organizing discussions on how to end gun violence was needed to show that there are people who are taking responsibility towards ending this issue. I’ve often felt helpless when it came towards activism and that I was not doing enough to create a change. The walkout allowed me to hear from educated speakers and also become more aware of other ways I can prevent gun violence from happening and ignite change. At the end of the walkout, there was a sense of unity within SLA’s community and I was pleased with my generation’s ability to join together in a time of urgent action.

The walkout was only the start towards students demanding gun control in the US and I plan on supporting them every step of the way. I’m not sure what are the planned steps after the walkout is beside the March for Our Lives on the 24th. I think the next steps will be more public acts to get attention on the issue, discussions on gun control with those in power, and gradual changes were done to establishments’ relationships with firearms to make it harder for anyone to carry any guns.

School shootings are obviously a huge issue in the United States, and I believe that the walkout was an impactful form of protest against school shootings. Personally, I don’t have an issue with protests or walkouts, and I support the idea of a walkout, but I’m not very politically involved. I didn’t feel as informed as I should be about shootings in the country and felt it wasn’t right for me just to walk out because others are walking out. The week that the walkouts took place was a little bad timing for me personally because I had missed some class that week and I had to make it up.

The idea that someone can still break into a school with a gun concerns me. I’ve researched the  Columbine High School shooting that took place in 1999, and I would’ve thought after an incident like that, that school shootings would never happen again. It wasn’t until the Florida shooting that I understood how often school shootings occur and why. People now believe school shooters all have some sort of mental disability and labeling people with disabilities as violent.

The walkout allowed for people to get politically involved with a topic that they can relate to because this is something that is going on in our communities. I feel an immense amount of empathy for the people who die in school shootings and I can’t imagine what it’s like to go through something like a school shooting. I believe that these walkouts may lead to some sort of solution those who are protesting.  However, I still wonder what this walkout will accomplish. I understand that this walkout is meant to prevent gun violence and raise awareness about school shootings but this doesn’t ensure that shootings will stop. This is why I’m cautious about protests if there isn’t a clear solution I worry about if what your protesting is worth it.