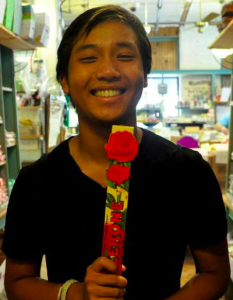 Every February 14th, the internet explodes with melodramatic updates, tweets, and rants from thousands of teenagers publicly announcing that they are either:

a) happily infatuated with the gleam in another persons eyes

d) complain about any or all of the above.

I have had my own run-ins with the courtship traditions of Valentine’s day. In the second grade, I came up with the keen idea to write a secret valentine to the object of my affection. The plan was perfect, I would sneak out into the hallway during lunch and slip my valentine into her cubby. I had crafted my own card, a piece of red paper with a giant sparkly heart sticker in the middle with the phrase “I love you, sincerely your secret val–“. There was but one thing that stood in my way, the spelling of “valentine”. With lunch drawing closer and closer I made the chief decision to ask for help instead of risking an incorrect spelling that could possibly insult my beloved’s eyes. During snack time I walked up to my teacher and quietly asked in a whisper “How do you spell valentine?”, showing her how talented I was at my trade. She glimpsed at the card in my hand, and with what I swore was a smirk, snatched my gorgeous valentine up and ripped it in half, telling me: “We don’t do that here”.

Despite the pounds of commercialized merchandise and television commercials, only a few know of the origin of this holiday.  The holiday originated from the martyr, Saint Valentine. He was a Roman priest from the 3rd century who was incarcerated, clubbed, and beheaded for marrying soldiers against the Emperors rule. The story goes that before he was was beheaded on our current Valentines Day, he left a note to his friend, the jailer’s daughter, signing it “From your Valentine”.

The motives behind Valentine’s dying words could not be more obvious, he said them out of love. Not the mushy hallmark kind but a mutual appreciation for each other as friends. This is the message I believe we should take away from history. Valentines Day is not a contest to see who can get the most chocolate and it is not a deadline where you either pass or fail depending on your relationship status. Rather, it is a day to both, be thankful your head is on your shoulders, and to celebrate shared love with our friends and family.