We all know what Netflix brings to the table. if you don’t, I would love to find the rock you have been living under.Netflix has been the leader in movie rental for about 18 years now. Along with the disc rentals that they provide for their users; they also provide a streaming component that allows them to streams movies and television shows to the users device. Netflix is a billion dollar corporation and is only reaching new and greater heights.

“But are they the best video content provider? Is there a better “Netflix out there?”

You would think no one can compete against the billion dollar corporation, in fact they were the new guy on the block when they first arrived. Other Movie rental corporations like Blockbuster couldn’t compete with mailing ability of Netflix, but is there a new sheriff in town besides Netflix.

Yes, they do in fact have rivals; Hulu and Amazon Prime are perfect examples of why Netflix has met its match. 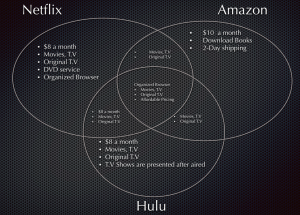