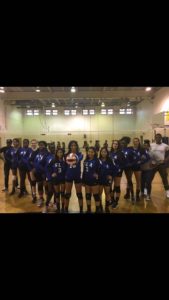 So, what’s new with girl’s volleyball this year?

For the girl’s volleyball team here at Science Leadership Academy, this team is unique.   According to coach Karina Hirschfield, a lot is different this time around.

“This is a real strong team, one of the strongest I’ve had,” says Hirschfield. Despite it being the beginning of the school year, this says a lot about the determination and focus of the team. In particular, Hirschfield definitely sees a great amount of potential in this year’s team.

“This year, the 14 player roster lost one of their best setters, Malwina Dymek, who was on the team for four years,” Hirschfield says. “The team has recovered from the loss with talented freshmen. We started the season playing harder teams, not like previous years.”

The team practices multiple times per week, including the weekends. No other team in the fall practices on their weekends. Because of this, the players has to juggle their courses and still play the game they enjoy.

As a student athlete, one has to deal with sleep deprivation and school work. When someone has a lot on their plate, it often stresses them out.

This year, Vesslee feels the team has the skillset to compete, but they have to work on their communication.

“I think that being a part of the team is the best,” she said. “I know we have the skills to make it to the championship playoffs this year.”

Senior Jamira Terrell became a member of the SLA’s volleyball team this year. She states she’s been playing all around positions since 5th grade and settled into outside hitter from 8th grade and now here at SLA.

Jamira practices everyday to build strength and endurance even when we are not in an official practice. “I feel practice makes me a better person overall. Like the saying goes, ‘practice makes perfect.’”

Terrell agrees with Vesslee that the team has a few downfalls.

“Coming from a division one team I feel we need more team cooperation especially during disagreements,” says Terrell. “More team decisions rather than just captain decisions.”
The team currently has a 5-4 record and has the championship on their mind. Their last two games of the regular season are on Tuesday, October 18th against Bodine and Thursday, October 20th against George Washington.