This weekend The University of Pennsylvania hosted the 120th annual track and field carnival, The Penn Relays. The Penn relays are series of local, national ,and international track and field events that take place over a three day period at Penn’s Franklin Field.

The stands of Franklin field were pack with fans. There were Jamaican high school and professional athletes competing in the event, and their were many cheering fans sporting Jamaican colors green and yellow.

All kinds of athletes compete in this track meet. From local high school runners to world class olympians. Many of the events are relay races, such as the 4×100 meters, 4×200 meters, 4×400 meters, 4×800 meters, 4x one mile and sprint and distance medley relays. There are also individual races, and field events such as pole vault, triple jump, long jump, high jump discus, shot put and javelin.

Many famous athletes have competed in the Penn Relays, such as Usain Bolt and Allyson Felix. The 2014 Penn Relays marked the fiftieth anniversary of Jamaican High schools competing in the Relays, they have been competing their since.

History was made at the 2014 Penn Relays. Many meet records were broken. The University of Texas broke the Penn Relays college women’s 4×400 meter record with a time of 3:25.05. Keturah Orji broke the women’s triple jump record with  a 43-10.5. Andrew Hunter broke the Penn Relays and U.S. high school sophomore record in the 3,000 meters in 8:16.31, and Thomas Awad ran a 3:58.34 in the men’s Olympic Development Mile, making him the second student from University of Penn to run a sub four minute mile.

The Penn Relays is a big exciting track meet, where athletes from around the world compete. It is also an historic event of The University of Pennsylvania, and Philadelphia. 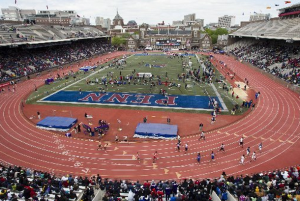