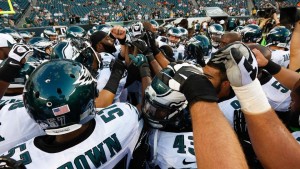 “Ugly” would be a compliment for the Philadelphia Eagles right now, especially after their 20-10 loss to the rival Cowboys on September 20th, in week two of the 2015 regular season. The offense was non existent, almost literally. In total, the Eagles managed seven total rushing yards. Seven. Sam Bradford being the leading rusher with 9 yards from two carries. Demarco Murray rushed for a mind bending two yards, Darren Sproles was a bother with -4 yards to his name, and Ryan Matthews amassed a staggering zero yards. It is easy to blame the running backs for this pathetic display, but the talent is there. Demarco Murray was the league’s leading rusher last year with 392 attempts along with a staggering 1,845 rushing yards and 13 TD’s. Ryan Mathews was the starting running back of the San Diego Chargers, when healthy, with his best season coming in 2013 when he rushed for 1,255 yards and earned 6 TD’s. With the lighting quick Darren Sproles being the glimpse of light you manage to see every once in awhile until he is in the end zone, a powerful offensive weapon.

Sam bradford played averagely, going 23/37 with 224 yards and one TD but two interceptions. The defense played pretty well, this being disguised by the offense’s performance. They totaled 64 tackles, three sacks, and six tackles for loss, with the secondary playing a solid game as well. A little more offense and the Eagles take the game.

At this point you are probably thinking, there is no way this team is Super Bowl material. Yet there is hope for many reasons. Here are three:

One, the Eagles are 0-2. That’s not good thing off the bat, but let’s look at the history. In 1990, the Eagles started 0-2 and finished 10-6 and made the postseason. Similarly, in 2003 the eagles started 0-2 and finished 12-4 and also made the playoffs. As George Santayana said, “Those who do not remember the past are condemned to repeat it.” The Eagles understand they have to win, they understand this franchise was in this position before and they will overcome.

Two, the Eagles only have one problem to fix. The offensive line which factored into every other of the Eagles aspects of that game. As previously touched upon, if the offensive line isn’t working the QB will feel pressure then he will make bad decisions or get sacked. This then resulting in the WR’s not getting passes and when they do, they probably won’t be good catches or much yardage after the catch. As a result of all this, the offense then is not on the field for a very long time, obviously meaning we score less. Beyond that, the defense then plays the majority of the game and gets fatigued, resulting in the other team doing better. The eagles wrote the recipe for losing in the NFL vs. the Cowboys that sunday, and it all starts with a solid offensive line.

Three, the Eagles just won 24-17 this past Sunday vs. the Jets. Playing a great offensive game, specifically in the first half. The Eagles have been a half game team this year. Shockingly, the Eagles have been outscored 39-3 in the first half and in the second have have tried coming out firing to no avail and ultimately earning a loss. However in this win, the offense showed its potential. This shows however, that the Eagles are capable of winning and can win if they play a full game.

This is essentially a rebuilding year for the Philadelphia Eagles. There is a new QB, mostly young WR, a young TE, two new RB, new offensive line members and almost an entirely new secondary and linebackers. This Eagles team is brand new, fresh out of the box. It takes a while to break in some new sneakers, even if these sneakers are some of the nicest looking sneakers you have ever seen, it takes time. The Eagles have plentiful talent and that has shown on defense as well as occasionally on offense. There is no need to panic in Philadelphia. For even if this year turns out not be as successful predicted, the future is bright for the organization. However the Eagles will find a way to get it going, and they will make the playoffs. The talent will click and this team will be a forced to be reckoned with, fear the birds.