The new addictive app that everyone playing at SLA is called 2048. It a very simple game that involves moving numbers and multiplying them. The game was created by Gabriele Cirulli and is now the most popular game on the app store. It is very similar to another similar game called threes, and has been accused of copying that game.

2048 is played on a 4×4 grid. Numerical tiles take up each individual box in the grid. The game starts out with two number two blocks. By clicking the arrow keys all of the blocks move all the way in that direction. If two blocks with the same number collide they form one single block that is those two combined, so two twos make a four, two fours make an eight, and so on.

Whenever you combine two tiles, your score goes up by a number of points equal to the value of the new tile created. The object of the game is to keep combining tiles to get higher and higher numbers. The game is won when you get a 2,048 tile.

This is challenging because every time you click the arrow keys to move a tile, a new number two, or occasionally number four tile appears in a random blank square. The game ends when there are no empty squares left, and you have no possible moves.

Unlike many other popular apps, 2048 requires no gaming reflexes or fast thinking. It’s a purely mental game that requires logic and reasoning, targeting an audience that likes this sort of game.

2048 is simple and addicting. Every time a person plays it, they have to play it again to try an get a higher tile. Some students at SLA have succeeded in getting to the 2048 tile, while others still struggle to do so. 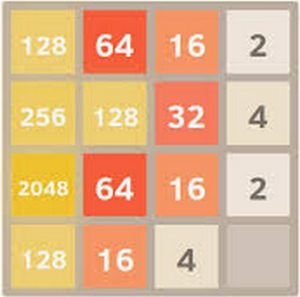