Do you know what the most common transplanted organ is? Or what country is the largest producer of milk in the world? Perhaps you know what breed Scooby Doo is?

Okay, Me neither. But after a few rounds playing the App Store’s #1 game, Trivia Crack, you may find out.

Until I was tasked with reviewing the popular game, I had not played it. Now, I receive notifications hourly telling me my opponent lost and it’s my turn to spin. Soon after I first downloaded the app, I must say I became slightly addicted. Fortunately, I’ve lost some interest, but I still cannot resist tapping the colorful square icon when I open my phone.

The objective of the game is to unlock six characters, each named after their category: art, entertainment, sports, history, geography and science. In order to obtain a character, you must answer three questions correctly in any of the six categories. Then, if you and your opponent have both secured at least one character, you have the option to unlock a new character by answering correctly the question corresponding to the character. Or you can really test your knowledge in a match to secure your opponent’s character. It sounds complicated, more so when you mix in the occasional sports question (Honestly, who really knows what the logo is on the Oakland Raiders helmet?).

I immediately fell in love with the soft, cartoon-like graphics. It’s a bit cheesy, of course, but very cute, appealing, and well-organized, not to mention festive, with the tune which plays every time I answer correctly. In all seriousness, the aesthetics of the game are very important to the user experience. While it’s not the graphics that attract me to the game, it’s that it doesn’t looking rigid and distasteful which encourages me to not abandon it. The buttons are large and it’s clear that whoever designed the app invested considerable effort and detail in their creation.

Besides that, the interactive experience of answering questions via switches, buttons and toggles feel nicely, reassuringly, appropriately reactive, meaning, when I press a button, it behaves like a button. Trivia Crack switches in and out of screens without lag. Something I’m not too jazzed about, however, are the oodles of ads which pop up on my screen almost every other game, though this may be my fault, as I’m too stingy to spend $1.99 to upgrade to an ad-free version.

Though this comes as a disappointment to many players, I’m personally extremely grateful that you cannot start more than three games in one hour (it seems sometimes like people are only starting to catch on that social media is addictive). And while I found that the timespan bothered many users (about thirty seconds), it was just short enough that I couldn’t look up the question online.

As for the questions, I think they’re great! Admittedly, some of the questions are a bit trivial, but landing your spinner in any category besides entertainment will guarantee that you’ll learn something new. I appreciate the question generating system, another great interactive feature. Questions are created, approved and even translated by the Trivia Crack Community, so you’ll rarely encounter questions you’ve answered before.

Though it may not be important for one to know, for example, the name of Paris Hilton’s dog, I found that playing Trivia Crack has allowed me to memorize important historical dates, geographical locations, and has even made me curious to explore a topic further, especially when I answer incorrectly.

(In case you were wondering, the answers to the questions above are, Kidney, India and Great Dane)

On a side note, my spinner looks like this half the time: 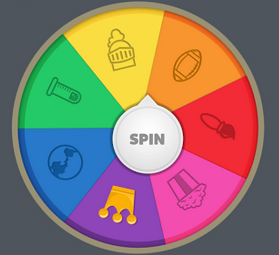