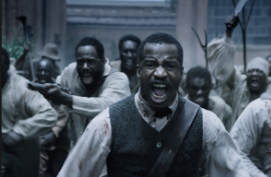 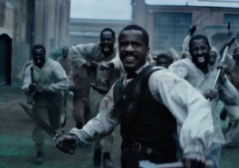 Life, Liberty and the pursuit of happiness! In 1831, Nat Turner led a spirited fight to end Slavery. A Slave in Virginia himself, He worked and got hundreds of Slaves to rebel against their Slave owners for the first extended period of time in the United States. This attempt ended after six weeks, but is credited as being the start of real rebellion among American Slaves.

On October 7th, 2016, Nat Parker released a movie about Nat Turner and how he fought for freedom. On October 7th, I had the opportunity to attend a screening  of the movie. The movie starred Nat Parker, who also directed the movie, Armie Hammer, Mark Boone Junior and others who played the Slaves who sought to rebel against their masters.

The most compelling part of the movie is that it shows the fight that Blacks went through during that time, such as having to serve food and beverages to the Masters during fancy dinners to having sex with visiting Slave Masters.

However, the movie also had some huge holes that need to be filled. For example, they  portrayed the young Slave that told one the Masters that Nat was about to rebel as weak. In truth, this Slave was a strong youngman that actually continued the movement after Nat was killed.

The script  also made White women living on these plantations seem innocent. Throughout the film,  White women were shown teaching the enSlaved children  and trying to defend adult Slaves. They never demonstrated how White women made Black men their  sex Slaves.

I am frustrated by these narrow portrayals,  but I also accept that no movie about history will ever be perfect. I give the movie a positive rating overall because shows audiences the history of Slaves rebelling, unlike many other movies based around Slavery this movie clearly showed the unity of the Slaves for the most part. At one point during the movie, Nat was getting whipped by his master because he was defending a fellow Slave. One of Nat’s friends who was a Slave picked up a brick and signaled to Nat that he was going to hit the master, but Nat told him not to, for fear of the master lashing out at him as well. This showed the brotherhood, unity and respect that Slaves had for one another even when going through hard times.

As I sat there in the crowded theater, with many other Black viewers, I felt the anger and hurt of people while watching the movie. But, when I watched it I felt a mixture of emotions. I felt happy, proud and angry at the same time.

When I think about the history of my people then and now, I begin to feel happy. Even though we are still fighting Slavery in the form of being imprisoned, we have fought through it once so we can fight through it again. But I felt angry because of what White men was doing to the Slaves. Even now, we are fighting against a system that continue to oppress Blacks, and sooner or later we will REBEL.