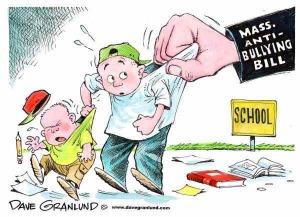 Science Leadership Academy is a very friendly environment when compared to the normal high school stereotypes. However, are there cases of bullying that we as a community have not noticed?

According to some news reports, there have been  increased cases of suicide and many of them are kids or teens. According to a study done by Yale University, victims of bullying are 7%-9% more likely to have suicidal thoughts.

You might be thinking, how in the world does that relate to anything that happens at Science Leadership Academy?

Principal Chris Lehmann does not tolerate bullying or any form of fight, he will try best to settle it and prevent it. And when interviewed, most of the students at SLA said they never heard or seen any type of bullying.

Junior Stephanie Dyson said she have not witnessed any type of bullying at the school.

“ I know people have struggle with bullying, but not from SLA. But I think to myself wow that could be my friend… what made it get to the point where they feel so trapped?”

Brittany Atkinson said, “We don’t really bully at SLA, but a lot of us mess with each other.”

But there are a few who confirmed that they have seen it happen, maybe not physically, but in another way.

Junior Tenzin Chemi have not seen much bullying happen at SLA, but here’s what she said about life online:

Tenzin declined to say anything more specific about the incident.

Senior Khadijah Fofana sees a blurry line between having fun and something dangerous.

“As far as bullying at SLA, inside, outside of school, or online, there have been a lot of bullying I saw. People might just say, “Oh, I’m just playing”, but they don’t understand that it can affect someone. I feel like some bullying at SLA are not intentional, but it might still hurt the other person. Bullying can start from a form of joking, sometimes people do get sad, but does not show it. They accept it and say it’s just playing. At the end of the day it’s still bullying, even if they’re laughing with you.”

One of the reasons that bullying doesn’t happen much at our school is because the teachers raise awareness about the issue. For example, on the day of the PSAT many freshmen who are not testing attended an anti-bullying workshop in the cafe. The workshop was planned by Ms. Hull and Ms. Giorgio. Ms. Giorgio said their intention for doing the anti-bullying workshop was for students to recognize that they are apart of a community and for them to be able to befriend people they haven’t had yet. “I’m hopeful that people at SLA will continue to respect and celebrate each other diversity.” Ms.Giorgio is worried about the difficulty of being able to identify online bullying, because most of it happens outside of school. and students who are victims of bullying often keep it to themselves.