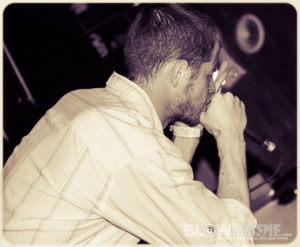 Sometimes students can forget that teachers have a life outside of school. That’s why principal Aaron Gerwer’s band has been big news floating around SLA. A couple students are even some of “Chimpgrinder’s” biggest fans.

Chimpgrinder is a band consisting of Mr. Gerwer and a few of his friends that started in 2011. “I had a friend who joined this band and they had booked a show in Brooklyn but they didn’t have a singer so only two weeks before they asked me if I wanted to come sing with them and play the gig. We only practiced twice before we went on stage,” Mr. Gerwer explained. Though he only sings in Chimpgrinder, he has played the guitar, bass, and drums in bands since he was 13. “I don’t play other instruments in Chimpgrinder because for this kind of music you want your singer to be able to run around and get in people’s faces and all that kind of stuff.”

The band’s music genre is called ‘sludge.’ “It’s like a mix of punk rock and black sabbath-type metal,” Mr. Gerwer clarified. He writes the lyrics while the other members of the band write the music. They will often play him songs first so that he can figure out what the lyrics should be based off of what the music is making him feel.

The members of the band are a software designer, an engineer, an HVAC worker, and of course a high school principal, with the eldest member being in his 40’s. They mostly play 21 and over shows. Their most frequent venue is “Kung Fu Necktie,” a place for food and live music on 12th and Front street. While they mainly play in center city Philly, they have also done shows in Brooklyn and Delaware.

What is the Inspiration for the Name?

The inspiration for the name Chimpgrinder came from the first place that they practiced. “[It was] this old space…a preparation research facility. They had one of those big centrifuges where you get in and it spins you really fast to prepare you for space. The place where we were practicing was where they used to train the chimpanzees for outer space, our room was actually on the old animal wing. It had tiled floor with a drain in the middle so it was probably a place where the chimpanzees would actually be,” Mr. Gerwer recalled. Since then, many songs for Chimpgrinder have told stories of a Chimpanzee who travels through different dimensions.

What do Students Think About It?

Sashoya Dougan and Meeghan Kersten, 10th graders at SLA, are some of Chimpgrinder’s biggest fans. “One day a bunch of my classmates were talking about it and just as any other curious student would, I looked up the band and thought it was pretty cool,” Sashoya recounted, “It’s a bit different, but due to the vast genres that I listen to, I quickly became accustomed to it and ended up enjoying it.” Sashoya and Meeghan bought the Chimpgrinder t-shirts and record and took a picture with Mr. Gerwer the day they wore them.

As for Mr. Gerwer, he appreciates that students can connect with the music, but he’s not sure how this will affect the new music going forward: “When we produce a new record, I’ll know in the back of my mind that there are students listening to it so I’m interested to see how how that’s going to change things.”