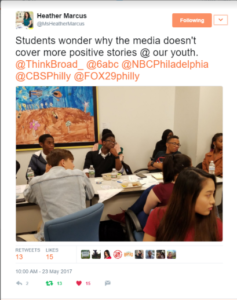 I like going to conferences. If it’s a topic I can engage with, I love attacking it head on and debating with people who have opposing views.

On Friday, May 19th, I had the opportunity to attend a conference at the Central Office (440) of the School District. I initially thought we would be talking about safety and the Broad Street Line. According to the email invite, this session was supposed to be about “This is a conversation that has been had with adults, but has lacked student voice. The discussion will be around challenges that individuals are facing with the Broad Street Line. There has been many issues on the line and our children being labeled as dangerous. This is a time for them to have their voices heard around the challenges that they face and opportunity to come up with solutions. FOOD WILL BE SERVED!! I know that important for them as well.” as quoted in the email. However that wasn’t the case. “The Philadelphia Foundation and the Knight Foundation” hosted this discussion, and while some aspects of this conversation between students and adults was productive and beneficial, in many other ways the execution of this conversation was done in ways that could have been better.

As far as I know, the student attendees came from four schools: Masterman, CCP Academic Scholars, Yes Philly, and Science Leadership Academy. The adults attending this meeting ranged from organization leaders who helped students in their own ways, volunteers with the organization, and the organizations leaders. The topic of what we would be talking about was very vague up until the beginning of the discussion where it was explained we would give ideas on how to improve Philadelphia.  One particular adult in the conversation wanted to strictly talk about “sanctuaries” that the youth could go to instead of being on the streets, while junior Taytiana Velazquez-Rivera talked about community gardens and parks that were locked away from the actual community. When she brought up her idea,  an adult that was a volunteer with the organization instantly shut down that topic of discussion which prompted the leaders to tell everyone every idea is important.

The fact that we didn’t know the topics  beforehand left many people in the room with no clue on what to specifically discuss. As a result, the conversation slowly opened up, but once it was broken open conversation flowed, but only with about  15 out of the 40 students that were in  the room.

Why the low participation rate? It was my theory that many of the students were there just to be out of class that day. Many just sat there, and talked amongst themselves, but when called on to add to the conversation offered nothing. . I admit that us SLA students stayed quiet up until the discussion leader called us out, which opened a pandora’s box of SLA students, adults, and CCP students combating many different topics. Sometimes agreeing with each other, sometimes debating with each other but it was clear that SLA students were forcing their voices to be heard.

Overall, after getting into the flow on the conversation within it began to gel but by the end everyone had the same thought. What really would be changed because of our meeting, and what the hell was the main topic of this conversation we had just had?

And one future note for “The Philadelphia Foundation and the Knight Foundation”, please refrain from having your white volunteer who said that Senior Luke Risher was “too white to go to Howard” from your next meetings. Apart from the racially insensitive commentary, he asserted himself too much in conversations, and his overall feedback was in no way helpful.