Freshman year was a big adjustment for me and as soon as I got settled in, benchmark season was upon us. I had no idea what to expect. This first project that I got at SLA was the “Me Magazine” assigned by English Teacher Amal Giknis. The “Me Magazine” was basically a magazine that we had to write about ourselves. One of our passions, a person, and a place that are important to us. This project wasn’t a benchmark, and for me it was fun.

The first real benchmark I received was an English benchmark. It was based around the book Kindred, written by Octavia E. Butler. We had to create what happened to Kevin, the main character’s husband who had been stuck in the past for 5 years, during those 5 years.

I think the most difficult thing for me was time management. I have never had an assignment that was organized so specifically. I struggled with turning everything in on time. I remember crying the night the project was due because I turned it in 10 minutes late. We were reminded repeatedly not to turn it in late.

One thing that was still new to me, but helpful, was the rubric. 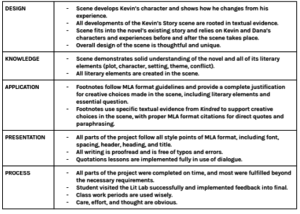 I wasn’t used to having a rubric to help guide me on what I needed to get done so I struggled a lot. I was used to just being given a project, doing what I thought was right, then getting graded and seeing the rubric after. Even though benchmarks were still new and I was getting so many at once, I managed to get a good grade on my first benchmark at SLA.

Sophomore year is a whole different ball game. Everything seems easier now. Projects aren’t as stressful to me anymore. I have had so many people tell me that school is either going to get easier, or it’s going to get harder. I personally think that sophomore year is both. Harded and eiser. It’s harder because the material we are learning is harder. But at the same time it is getting easier because we are used to the amount of work and adapt to the difficulty.

My first benchmark this year was a geometry project, that was focused around reasoning and logic. The project consisted of a lot. It was a lot of thought, reasoning and proving the puzzles and problems we created were correct. We also had to solve the puzzles and problems that our classmates created. After solving we had to justify our knowledge and answers. My end product was a 22 slide long slide show. I was proud because it was the first benchmark that I turned in early, and it was visually pleasing. 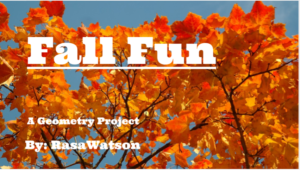 (Cover of my Geometry project.)

There is a major change from freshman year to sophomore year in terms of benchmark. They continue to get difficult, but you can work your way through them because now you have experience with benchmarks.