Extra! Extra! Read all about it!

There has been a grueling, double homicide in a 3rd floor men’s bathroom. The victims were an older bathroom stall couple, aged eleven and married for nine years, their doors had been savagely ripped from their hinges in an act of inhumane violence. 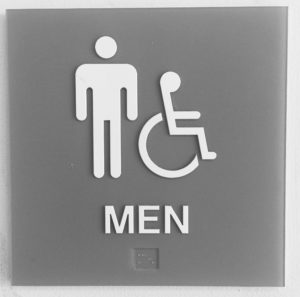 Children of the victims, two young ceramic sinks and plastic soap dispenser, were forced to watch. It was as if they were transfixed to the wall, as the suspect used brute force to tear their parents apart.

The children were left unharmed as the suspect fled the scene before conducting any further action. Authorities have since moved the survivors from the murder scene and transported them to Toilette Hospital. While unharmed, they were undoubtedly traumatized from the horrors they witnessed.

A fund has been started in their name by kind hospital personnel to cover the payments of the therapy sessions they will have to go through in order to recuperate.

Currently unidentified: the suspect is current still at large and authorities urge to the public to provide vital information in order to apprehend the murderer.

The suspect was not witnessed fleeing the murder scene but due to our incredible scientific inventions authorities can gather the suspect has eyes, hair, shoulders, and a mouth. Due to the location of the murder, authorities suspect the culprit may also be male but students and staff should be wary of any with hands.

If you see anyone matching this description, authorities urge you to call them with you information but warn to stay away from the suspect as he is dangerous.

With no way knowing of where or when suspect might strike next, anyone with hinges or screws is warned to be on alert.