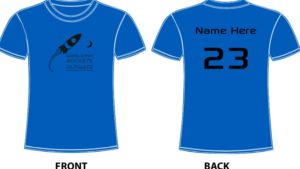 Starting over the summer, I began to plan the long grueling job that would be ordering newly designed jerseys for the SLA ultimate uniforms. A feat that has not been accomplished since the first uniform designed when the first team was established.

It all began with meeting with the lady that would order the uniforms for our team, Candi Crispin. She would connect us to her company’s uniform makers and give us discounted prices. The first step towards success in this terrible process.

After discussing the pricing, the next thing I absolutely had to do was get Chris Lehmann on board, the ultimate frisbee coach. Set in his ways, he wasn’t super keen to the idea of getting new jerseys at first because he still liked the simple design. But I was gung-ho on having this process go through all the way. So after a short sales pitch on why we should have new jerseys ranging from “They’re only $32! That’s way cheaper than what  they run for ($70),” all the way to “This is a new era of SLA ultimate! We need these.” He finally tentatively agreed and I set out to show him that this wasn’t just another student proposal that wouldn’t follow through. I had to show him that I meant business. 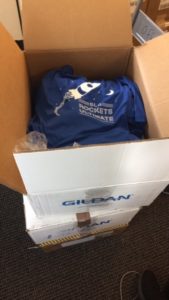 After many weeks of planning these jerseys, I made a google questionaire for players to give me all of their information for sizes.Sadly after a week of constant form replies, they died down. With these results I had to turn into a monster, hellbent on one mission:get everyone to sign my form! Countless passive-aggressive facebook posts on the ultimate frisbee group went out, emails, and up-close encounters.I did whatever it took to get everyone to fill out the form to make sure I had everyone down with each information column filled.

I set up two ambassadors who could help me with collecting money from the other players. Jorin Gervani would remind everyone and give me money, Eli Block would help check names off of our spreadsheet, and bring the money he collects to Ms.Diane

The main selling point was us joining the exclusive group of teams who have names on the back of their jerseys. Candi would order the jerseys for us before we paid so we would have them in time for our first tournament. She agreed to this as long as we paid her back within a month which added more pressure onto my already stressful job. So I put on my new persona as the passive-aggressive bill collector that wanted his money as soon as possible, giving a deadline that was way before the money was even due, giving a sense of urgency to the players. Once again facebook was my outlet to inform everyone of when money would be due and how much it cost.

The first day of collecting money? Only two people out of the 36 gave us money. Jorin sent out a new facebook post and the new rule was: anyone who did not pay wouldn’t get their uniform until they did. With another round of passive-aggressive emails, yelling at every ultimate player I saw, and even interrogating another player I finally had all of the money in and ready to go. With help from our CFO Ms.Diane.

We ran into a few problems on the logistics part, we didn’t have an official a design ready. Okay to be clear… we HAD designs but none of them were good enough to really pay for, nor did Lehmann particularly like any of them. Finally after stressing about how we didn’t have a design Mr.Lehmann pointed me in the direction of Ms. Giknis, who I wished he had told me about a long time ago. Seriously Mr.Lehmann, a lot of stress would have been saved! After 10 minutes of sketching and designing she had an official logo ready for us by that night. I can recall the almost tears of joy I had.

After the planning process started in August, official spreadsheet collecting started in January, the home stretch began in March. We had collected all the money by the 10th and our first tournament was March 31st. We were almost there, almost done. Our jerseys finally here the day before our first tournament. We marvel at the jerseys and I think of the big accomplishment I had just made. My fight to get the team new jerseys had come to an end. I was able to make it happen, and the first to do so as well.