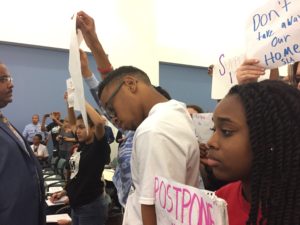 At 1PM last Thursday, an email hit student inboxes that changed the life of the SLA Family. The email that made everyone’s heartbeat, palms sweat and want to jump into action. Founding Principal Chris Lehmann — or, as some students like to call him, Poppa Lehmann — sent a surprise update about  the new vote for our building. Originally, the SRC was going to vote on a two year lease extension but last minute they changed the game and decided on one year instead.

At 4PM last Thursday, students, facility, parents and even alumni gathered inside the brightly-lit but still-depressing auditorium of the School District of Philadelphia headquarters while members of the School Reform Commission took their comfortable seats with water on hand. Some in the SLA community starved, both literally and figuratively. With the short notice SLA representatives were not able to grab a snack for the three hour dragged out meeting that determined the fate of our current home. 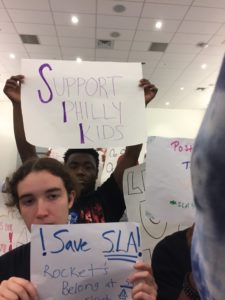 But we still showed up with signs and speeches and our voices really to be heard. We stood outside of the district building with our signs ready to enter and be heard and seen. The meeting started and some could definitely tell that it was going to be a long night. Faces disgusted and stomachs screaming. Our first speaker was called, “Luke Risher” we all made noise and stood behind him but right before we were able to get in our spots, School District Police decided to block us from getting close. That didn’t stop us. We stood and set until no more SLA students spoke about our home. After our second speaker, Superintendent Hite told District Police to stand down because he understood that we were standing behind our family members who were fighting for out home.

At 7PM last Thursday, the moment that we had been waiting for finally came. After sitting for three hours hearing from people that agreed with the renewal of SLA lease to people that disagree, it was time for the vote. But before the vote SRC member Bill Green rattled off statistics that many stated was irrelevant information before the vote of our school. Our objective was to have them postpone the vote, but the votes came in and every member of the Commission voted for a one year lease extension. After the SRC vote many were still confused.

But with all of that, we the SLA family live to fight another day. Another day where we get to hold our heads up high because we fought with all our hearts. We fought for what we believed in and what is right. Some may say we didn’t get our desired outcome, but in reality we did. Now EVERY School Reform Commissioner knows that one, we fight as a family and that we fight strong. Two, they know can never say that they did not know the request of the SLA Family.

Family, with the victory I ask that we don’t stop fighting. Rev. Dr. Martin Luther King Jr. said “our lives begin to end the day we become silent about things that matter.” So, continue to stand for what you believe in, continue to fight for change and continue to stay strong.