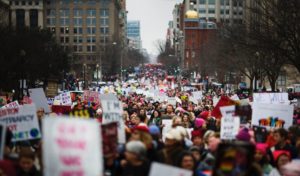 I woke up to the sound of ducks quacking at 4 a.m. and walked out of the house half asleep to the OCF coffee house, the meeting place for a group of 451 protesters on our way to D.C.

As soon as I arrived at the coffee shop, I was invigorated and ready to go. I was, and will forever be, touched by the people who were there. It is a new era of activism. There were girls in strollers, women in wheelchairs and every age in between.  By 6:30 we were on our way out of Philadelphia and on the road to D.C.

A silent excitement bubbled  through the bus for the next four hours, and as soon as we reached RFK Stadium in D.C. (our parking destination) the bus erupted  with cheers. . Thousands of buses were parked in the lot, and out of them flowed even more people than I thought possible. All that was visible was a sea of pink pussy hats and busses coming into D.C.

The metro was packed, I used to think the most crowded subway I’d ever see was in New York, I was mistaken. By 11 A.M. the D.C. Metro reported it had 275,000 riders which was eight times the amount of riders on a regular weekday. This number beat out the number of riders for the Inauguration, which only reached 193,000 riders by 11 A.M. The number of riders continued to grow as the day went on.

I stepped off the metro and was met with a crowd moving towards the capitol. At first I was busy reading signs and soaking in the experience of all these wonderful people (not just women) coming together to march that I did not even take notice of the people sporting buttons or sashes representing the different states. 600,000 people (a rough estimate) came together to stand in unity and represent their concerns for this new government.

Unfortunately, I was not able to make it close enough to the stage for the rally to hear the speakers. Every turn brought me to a blocked-off section, often crowds came to a standstill, and once the march was set to begin there was no space for the crowds to move. The group I was with decided to take a small detour and make our way to the White House through an odd route. Avoiding the standstill crowds, we were able to make it to the National Monument. Here, the march was actually moving, and we joined in. There was various chants, most of which I am sure were heard here at the Philly march and at marches across the globe. But incase you missed any of these marches here are a few of the chants:

“Keep your tiny hands off my healthcare plans!”

While this was not my first march it was my first women’s march and my first march in D.C. The experience was a moving one and while I do not enjoy that this is something I need to protest, I am excited to do so again. I enjoyed meeting people from different states such as  New York, Florida, California, Ohio, Oklahoma, and Texas. There was also a group of marchers from Canada!

Coming home, there was a sense of fulfillment and a new fire in the people around me. I read up on a few articles on my way back and while most were informative and supportive, I was disappointed to read an article that described the march as unorganized. It stated that there were so many different signs talking about a wide range of topics that no real message was getting out.

My response to that article is this: you got the message wrong.

Not only was the women’s march able to gather 600,000 people in the nation’s capitol, it sparked a worldwide march in over 150 cities. The world united, and fought for their fundamental rights.
Now we cannot just fall back into our everyday patterns. We need to continue to come together to protest. We need to remain informed about the actions that the government is taking. For those who wish to continue fighting outside of protests should check out the first 100 days challenge on the Women’s March website. Get involved and work with others in your community! 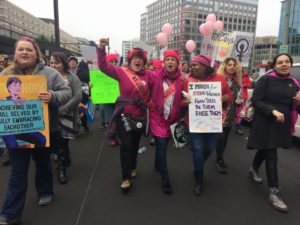