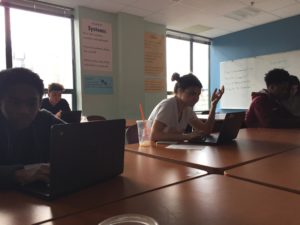 So, we’re sitting here in Journalism and the internet is down. We all have work to be doing, but we can’t do it, so we thought we would describe what we do when the internet goes down at SLA.

Deja: I guess I’m sitting here for the next 20 minutes. What am I supposed to do? There’s nothing for me to do. I could type, but it wouldn’t save. There’s no point. I just try to keep whatever I was thinking in my head until the wifi comes back. Pulls out a pencil and starts to do some math.  Anybody want to trade pencils for one that’s good?

Tamir: I think, “oh damn, I hope that saved.” And then I just sit there on my phone. There’s nothing else to do.

Saamir: I get a little upset if my stuff didn’t save. Then I think, “Oh, free period!”

Deja: You know what I actually do? I do stuff for other classes. I’m doing math right now.

Ella: I just go on my phone. I have unlimited data.

Tamir: I have a hotspot, so sometimes I do that.

Aaron: If I’m not in math class, this is something I am always thinking about. It shuts down your upside, you know?

Aidan: I do math homework.

Mekhi: First I think, “no work for right now!” But that just means more work for later.

Caroline: It’s a waste of time. Usually people just go on their phones until it starts up again.

Saamir: You wait for Ms. Diane to say, “ok everybody, the internet is down.”

Aaron: An internet outage is as bad as a power outage, if not worse. We haven’t had one in years, though.

Maddi: When it goes down during class, I talk to someone.

Tamir: Or you start looking around and asking, “it it only my wifi?”

Meymey: I know the wifi is down, but I keep trying to switch between different networks.

Aaron: When there’s no wifi, I go through the definition of insanity.

Lauren: I keep refreshing the page, but if it’s Google Drive I don’t do that.

Pahomov: What’s the worst scenario you’ve ever experienced with the wifi going down?

Tamir: I was doing a video project on WeVideo. It didn’t save. I cried. I really wanted to fight SLA.

Deja: I think it was a Spanish project last year. The wifi was messed up.

Meymey: If you decide not to type on Google Drive, and you actually do it on a canvas assignment… The whole room gasps. I’ve lost big pieces of writing that way.

At this moment, Ms. Diane comes on the loudspeaker to make the announcement about the wifi being down.

Taamir: Is that really necessary? Is there anybody who is actually trying to do work right now?

Aaron: People who type in canvas do not deserve sympathy. If they lose their work, that’s their fault.

Tamir: I have unlimited data, but it doesn’t always work.

At this point, the conversation about wifi dies down for a few minutes.

Everybody opens their laptops again and frantically begins clicking on their keyboards.

Ella: Oh…  it worked for a second.

Deja: My browser says the site can’t even be reached.

Pahomov: Wait, yes it is!

Everybody opens their laptops again and begins to type.