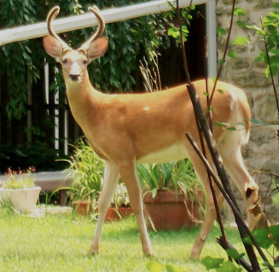 There is an overpopulation of white-tailed deer (Odocoileus virginianus) in Pennsylvania.  A lack of natural predators in the state has allowed the population to go out of control, causing destruction of forests, crops, and causing car accidents. The forests of Pennsylvania cannot support this many deer, and it is causing a problem for the environment.

This wasn’t a problem a century ago. White-tailed deer were hunted nearly to extinction in the state. So why are there so many of them now? Many of the deer’s natural predators such as wolves and cougars have been pushed out of the state by hunters and destruction of their habitat. But the deer have adapted and thrive on farmland and even in urban areas like Philadelphia. Urban habitats offer protection from predators, and food. They can feed on crops and raid gardens.

An annual deer hunting season every autumn has helped control the populations in rural parts of the state, but what about in urban areas, like the city of Philadelphia? Hunting is illegal in the city, and as a result the deer populations in areas like fairmount park, Valley Forge, Pennypack park, and other places have gotten out of control. So these parks decided to have a deer cull.

The deer cull happens in winter. Hunters go into the woods at night, when  the parks are closed to the public. They use bows to kill deer in the park. The meat from the deer doesn’t go to waste, it is donated to homeless shelters, so it is eaten. This deer cull allows the population to be regulated. The Wissahickon park tries to keep the deer population down to thirty deer, which is a healthy number for the park to sustain, but the deer population is usually about 40-50 deer after the cull.

The killing of Philadelphia local deer has caused some controversy among people. While some people support the cull because of the believe in its environmental benefits and/or dislike deer raiding their gardens, spreading tics, and causing car accidents, others are against the slaughter of deer. Anti deer cull protests occur throughout the city, and elsewhere. They don’t believe that we humans should fulfill the role of the deer’s predator. But if we don’t, then what will?

Because we humans have eliminated the deer’s natural predators, Fairmount park has decided that we should fulfill the predatory role, and cull the local deer population in order to regulate it. This poses a controversy because an overpopulation of deer is bad for the local ecosystem, but some people are against the killing of our local deer. Urbanization has disrupted the natural balance of the local environment, the question is “should we as humans interfere to to try to fix it?”