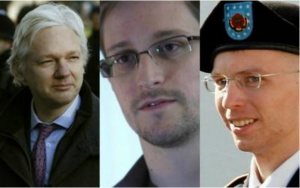 President John F. Kennedy once said: “The cost of freedom is always high, but Americans have always paid it.” These days, is it too high? In post 9/11 America there has been an increase in secrecy, or more specifically secrets revealed by whistle blowers. It has led to the age old debate upon what the government is entitled to let us know and what should be kept secret in the interest in national security.

One of the key figures in this debate is Edward Snowden, who made headlines in 2013 for releasing surveillance information from the National Security Agency and publishing that they were spying on US citizens. Is he a traitor or a hero? Depends who you ask. Some believe his actions were treasonous for revealing classified secrets of the United States government while others felt he was a hero for highlighting an injustice done by the government. People that cite him being a hero do mention that he leaked information to the american public of the “unnecessary” and “unconstitutional” spying the government does on its own people. People that call him a traitor bring up the fact that he has released documents about spying on other countries, most specifically China. While countries spying on each other is no secret, the unspoken rule is simply “don’t get caught doing it” and thus Snowden has not only troubled the foreign front but has also given other countries agencies information which can be better used to spy on us.

Another figurehead is Julian Assange, founder of the website Wikileaks which has had an outpour of government documents and footage found. An example of one of these footages being a video showing us soldiers shooting at foreign, Iraqi civilians and even a van full of children. Some have said that this is threatening as it dangers potential US identities and compromises missions overseas. But it’s also worth nothing that whatever was published had more with past missions then ongoing or even future ones.

A third figure is Chelsea (formerly Bradley) Manning, who leaked over 700,000 files to the website Wikileaks. These files have included detainees at Guantanamo Bay; of which has been criticized for wrongfully holding prisoners, war logs from Afghanistan and Iraq; which likely highlighted combat material like the videos mentioned above and state department cable. Like others Manning has faced both criticism and praise for her actions- which have sentenced her to 35 years in prison.

As SLA students, many of you might be asking ‘how does this relate to me?

Here’s the truth- as of now,you are an American citizen. Do you trust your government to have your best issues at heart? And what as a citizen do you believe we as the public should know and what it shouldn’t? Should we become aware or past government missions, current ones or just none at all?

These  are ultimately the decisions that will soon be in our hands as voters and taxpayers who have a say in our government. And our government doesn’t always act in the most popular way- take the recent letter to Iran as an example; many people were outraged by on how our elected officials would take a move that could derail sensitive peace talks, and shows examples of what would happen if our government goes unchecked.

Whether or not we agree with the decisions of these whistleblowers or not- our government needs to be check in some ways, otherwise we allow ourselves to controlled rather than guided by our government. Instead of looking to JFK in this situation, we suggest looking to the words of Ben Franklin: “Those who would give up essential Liberty, to purchase a little temporary Safety, deserve neither Liberty nor Safety.”