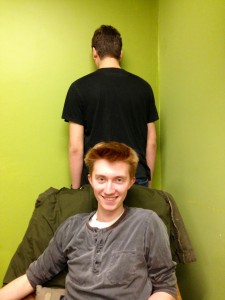 This interview is a part two of a three part personal interview series on what religion means to students in our school. This series sets out to answer what role religion plays in our lives and if how we think about religion has changed as we have grown through grade school and moved onto high school.

Jacob Lotkowski: What religion were you raised as?

James Prell: I was raised as Episcopal by my parents, but my parents were raised as strict Christians. The Episcopal church is much more liberal since gay priests are allowed and evolution is generally accepted as a fact.

JL: How strong were your families beliefs?

JP: My parents have always been loosely raising me with religion, they never raised me strictly, but their parents raised them really strictly. They both went to liberal colleges and broke out of that and are more liberal with me.

My mothers side of the family are missionaries all over the world. I don’t think that what they do is necessarily bad/brainwashing as some people see it, because they work they do is incredible wether or not it’s heavily based in Christianity. My interaction with my extended family a a whole is as normal as any other family, but we sometimes have to be guarded about what we say when religion or science comes up in conversation.

JL: How did that impact you growing up?

Comparing me to other kids–who were raised more religiously than me–I have this memory of me asking a kid what his favorite dinosaur was and he told me that dinosaurs were made up by scientists and that dinosaurs didn’t exist. This really confused me for awhile.

JL: Do you still feel any connection to the religion you were born as?

JP: Not really, I still have plenty of personal connections to the church but nothing spiritual.

JL: How have your feelings on religion changed since you were younger?

JP: I went through a phase of hating what religion does to people–since then it has mellowed down. I was an atheist but it has been watered down to not caring and letting people do whatever they want.