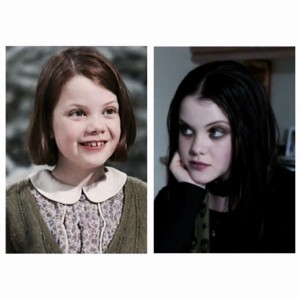 Remember your fave childhood Celebrity? There’s quite a number of them who have been famously known and the one’s who have been forgotten. They either have been in your childhood tv shows or movies that you’ve watched, but Today they seem different. From watching them from the start till now, the reaction of fans have seem shocking, of their transformation from playing roles as a child to roles when they’re older. When the Fans actually prefer they stay who they when young, instead of changing when they grow up.

The actress being most focused upon this month is Georgie Henley, who played the role Lucy from The Chronicles of Narnia, and who just finished starring in a movie called Perfect Sisters, where two teenage daughters drown their mother because of bad cycling habits she exposed to the family. In The Chronicles of Narnia, she seems “childish like”, having a acting spirit of courage, brightness and joy displayed throughout the movie while in Perfect Sisters, she seems “grown-up like”, where she displays her character as sorrowful, goth and naughty. She also uses bad language to play her role. Where as when Fans saw her transformation, it resulted in a not so good way where the majority were shocked and the others were quite pleased.

Recently, she stated in an interview discussing her experience of dramatic changing character roles in her movies , “It was really cool, I mean I definitely wanted to do something very different from Narnia because there was a massive part of my life with an amazing experience, but I also feel like as an actor is that you should keep challenging yourself and growing and it couldn’t be any bigger than Narnia, so I had to go smaller”.

From the interview, with her experience of acting completely different in a movie she was in as a child, she seems happy experimenting with the difference and gaining new style and knowledge in drama of acting.

But from that interview a fan commented and there reaction wasn’t as happy as Georgie’s. A fan states, “ I don’t like her now, she’s a brat and she totally changed”.

From the fan’s view of Georgie’s change in acting style, the fan seems quite unhappy and surprised from her difference in roles, because the fan misses the old character they’ve seen when they were younger. Which is common of fans to feel that way for an example Hannah Montana to Miley Cyrus today, but to the life of the actor they feel change is wonderful no matter what ways they express themselves.