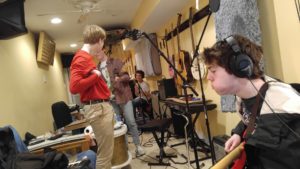 “I always procrastinate. I would rather have fun in the moment and put my responsibilities off for another time.” Griffin Gallagher told me. “But, nine out of ten times, procrastination will bite you in the ass.”

I was asking Griffin about his Capstone Project: A Philadelphia School District graduation requirement. However, being a project based school, our school is more inclined to place more stock in it, and SLA seniors are given the entire year to come up with the best project they can. However, just as with most school projects, many students will procrastinate.

“[My work] was inconsistent.” Aaron Watson-Sharer told me. “Until the last month I really didn’t do much. I knew I had to get it done, but for most of the year my time wasn’t really focused on the capstone. I was more focused on sports and classes.”

With so much schoolwork on top of applying for college, it’s no wonder that many students have a hard time finding the motivation to work on this project, especially when the deadline seems so far away. However, it creeps up ever-so-slowly, until it’s only a week away.

I sat down with Mr. Best, the Capstone coordinator this year, and asked him about the best and worst of the Capstone project.

“It’s independant work. Students learn about something they’re interested in, something that’s helpful to others.” Mr. Best advised. “Do something more than volunteer. Spin off a program. Do real work.”

I asked Mr. Best to think of less-advisable Capstone projects. “The first year, no one really knew how to do it. This one kid who really didn’t know how to do it basically stood up and did his Capstone on how not to do a Capstone.

“Everyone runs into challenges. You’ve got this great idea of what you want to do, but you run into road-blocks. Capstones change as the year goes on. A lot of it is what the student makes out of the hand they’re given.”