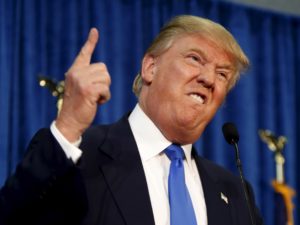 “If Donald Trump wins I’m moving to Canada” is a line that’s been used so many times in this election it’s subject to a drinking game, just like on every Facebook post with Hillary Clinton is a top comment from a Bernie Sanders supporter. But what would it really take for someone to move from their homeland in a time of desperate crisis or even just to move? The first thing to keep in mind is the realities in considering such a move. Like in a Donald Trump presidency’s case the reality is he won’t become all powerful- that’s why there’s a system of checks and balances, and we’re not saying that it wouldn’t be the worst presidency ever, but it would be very dangerous to several minorities, but it’s important to keep things in perspective. Overall this brings the question of what is enough to cause an SLA student to leave the country that many consider home.

Most at SLA would agree that they would be willing to leave if the government would become a totalitarian and a point of pride to leave if Trump became president. If a massive war was declared or some other kind of cultural or legal shift that they not only could not agree with and/or felt in danger of. Now, before I get too far it’s a fair point to bring up why people are so afraid of a Trump Presidency? The president only has so many powers that they can wield so it’s not like he’d have unlimited power to sway over the people. But people who I‘ve talked to say it’s goes beyond the oval office. The ignorance, racism and violence that Trump feeds on like a rodent brings out the darkest parts of the American minds and brings it to the center stage. Seeing the violence break out at his rallies- that he lets happen, the racism his supporters have been demonstrating on Muslims and Hispanics are utterly disgusting and have got people worried. As he cries against refugees coming to america he threatens to create refugees fleeing from America.

If the Editorial Board has one message to send to SLA on the topic, it’s this: if you and the others that you know don’t want Trump become president, than don’t let him, and don’t give up on America just yet.

Yes, the possibility of a Trump presidency has a dark and ugly side, but doesn’t everything? If people want to stop Donald Trump from becoming president than the best thing for you to do is to simply campaign for the democratic nominee against him. If it is (and it looks likely) Hillary Clinton we know that she is not everyone’s ideal choice to become president, but if you think that she is worse than the monster who won’t let a Mexican judge try him in court because he’s Mexican, than you are fooling yourself. This country is a time of crisis and it needs your help. For all the bad it’s done, never forgot all the good it has and can do.