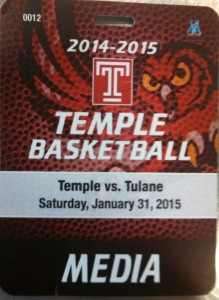 It was a cold day. Freezing. When I stepped out of the car, I immediately put my hood up, disappearing within my coat. Right before I had stepped on the pavement, Mr. Marc Narducci, the man I would be shadowing at the game, texted me that he would be a little late. We had met through a connection at the Philadelphia Inquirer. Recently, I had begun my internship there and one of my first experiences would be following a reporter in the field. Mr. Narducci is one of the lead correspondents who cover the Temple Owls men’s basketball team for the Inquirer.

It was 10:45, an hour and fifteen minutes before the Temple vs. Tulane basketball game was set to begin. I made a quick run to the Dunkin’ Donuts next to the Liacouras Center, the home stadium of the Owls. In twenty minutes, I was out and headed for the media entrance on the side of the arena. People were slowly filling into the building.

“Walk down and go through the doors,” read the message sent by Mr. Narducci. I followed the instructions and strolled towards a desk to find my press credential. After that, I proceed to the court. It was forty five minutes before the game would start and both of the teams were beginning warm ups. Not long after, I met Mr. Narducci, and he showed me around.

We went through some of the rooms that would be important and gathered pertinent information. There were stacks of papers that intensely gave information on both teams participating and even a page for every player on each team. There was also a page that gave me and other media members down to the second information on the pre-game events. Pretty neat if you ask me.

We shuffled to our seats, and past the court, where about two rows back, the media sat. There was a platform that stretched the length of the floor, with a black tablecloth suffocating it. For thirty minutes, we sat there and waited till the buzzer, indicating the end of the pre-game events. The men from Temple and Tulane warmed up in the meantime, stretching, dribbling, and getting shots up.

After the buzzer sounded, the Star Spangled Banner played, along with the introduction of the visiting team. But before the Temple starters were announced, they played a quick video montage to get players and fans excited. By the end of that I found myself quite pumped for the game. When they introduced the Temple players, I found myself clapping, along with the Owl faithful. Amidst soft celebration, I turned my head to examine the other member s of the press. Not one clapped or seem nearly interested in what was going on. With Mr. Narducci in the bathroom, I decided it was best to hold my applause, as a member of the media.

As the game begun, I decided that I would document a couple of things throughout the game. I would write down the time left on the shot clock after each Temple possession ended. This would be fun and interesting to analyze later. I also planned on writing down key notes that were influential in the outcome of the game.

Throughout the event, I continued with my plan. I also made note to watch Mr. Narducci and see what he did, along with follow his tips for me. As the game went on, he documented the score and little notes on Twitter for people to follow the competition. He also made sure to keep an ESPN tab open and check in with the box score. He later began piecing a quick story together because he would have to have one as soon as the buzzer sounded. Mid-way through the first half, as Temple pulled away from Tulane, I unintentionally began to cheer quietly for the Owls. Mr. Narducci tapped me:

“You know there’s an old saying,” he said nicely, “‘no cheering in the press box’.” I apologized, feeling slightly embarrassed, but noticed this was all part of the learning experience. By halftime, Temple led Tulane 28 to 8. Surprisingly, I had witnessed history. Tulane had the lowest scoring half of any team in the Liacouras Center. Wow.

Halftime was uneventful and was filled with watching 10 year old kids play the national sport of Ireland, Gaelic football. In the meantime, Mr. Narducci knocked out some points for his story. He said that since it was due right as the game was finished, he would have to make some inferences at this point in the game. He began writing the piece as if Temple had already captured the victory. As the second half started, I kept up my routine that had kept me occupied during the first half. As Temple maintained their lead, the rowdy Temple fans roared. I worked hard to keep my excitement contained.

Everything was going smoothly until late in the game. I felt a little splash on my clothes and I turned around. I saw a cup on the floor, and beer rolling around the platform. I looked at the guy and then down at my bag. It was soaked with beer. Great.

The man apologized to me, but made no effort to clean up the cup, mess, or help me dry my bag. Luckily, my electronics were on the table.  For the next 15 minutes till the game ended, my mind was held by my soaking equipment that I would have to carry into the press room.

After the game and Temple won, I quickly shuffled to the bathroom, while Mr. Narducci left for the press conference. Minutes later, I joined him. It wasn’t long before Quinton DeCosey and Obi Enechionyia, two of the most productive players that day, found their way here as well. Most of the reporters covering the game were there, but not enough to fill the locker room. Most had a recording device that they placed on the table for the players to speak into, so they could transcribe their comments later. Mr. Narducci videotaped them. They stayed for no longer than five minutes. It was quick and fast. I felt as though I had blinked and boom, they were gone. 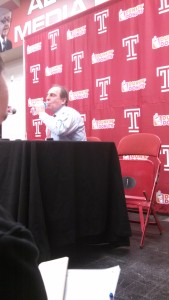 Soon after, head coach Fran Dunphy came in. Dunphy was much more insightful, but he wasn’t there for much longer either. 7 minutes tops, and he was gone. During each interview, I made sure to document acouple lines that I felt were significant and accurate. After that, a handful of reporters, including Mr. Narducci left for a small, claustrophobic room where they would knock out another, longer story about the game. Mr. Narducci started by transcribing his interviews so he could get his quotes done, and then he added more meat to his previous story that he had sent in a little less than an hour ago. It wasn’t long before I had to go.

During my experience with the Inquirer, I learned about the expectations of a reporter. For example, how they are asked to reach deadlines by the ends of games, analyze the game play, come up with insightful questions to ask in the interviews, and more. There is a lot asked of journalists in the field. It was great to get insight into these requirements and have a sense about what the job entails.