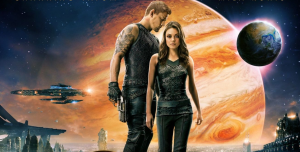 To be clear: I wanted to like this film. It had so, so much potential and incredible visuals, but even that couldn’t save this terrible, terrible film. Fair warning, there will be a few spoilers below to elaborate how bad it was, but please do read on.

The film centers around a young girl named Jupiter Jones (mila Kunis), a humble janitor who learns that she is an exact genetic copy of the dead monarch/ mother of the universe’s most powerful dynasty- the Abrasaxes, three siblings who each want a claim on the planet that she legally holds claim over- the earth- which can be ‘harvested’ for an enormous profit for either of the parties. To “harvest” means to kill an entire population of a planet to create youth serum so that those with enough money might live forever. She is rescued by ex-military alien called canine (channing tatum) who is working for the sibling Titius Abraxas (Douglas Booth). Despite seeming to mean well, he is planning to kill her, to claim her inheritance. Soon it becomes a battle to the Earth from abraxas when the main villain Balem (portrayed by Eddie Redmayne) kidnaps Jupiter’s family and holds them hostage on his factory in the planet Jupiter. Jupiter refuses to sign over the Earth to Balaam, who falls and is presumed dead in an ensuing battle that destroys his factory. Jupiter wipes her families mind of the experience and continues work as a janitor while trying to figure out what her next step should be, and has started a relationship with Canine. If this sounds confusing, it is. The film really needed one of those “long ago” 3 minute monologues and montage at the beginning of the film which would have saved everyone in the audience a ton of confusion. While I applaud originality in film- and this film does have a lot of that- if you can’t get a new and broad universe in an easy way then you’re during them a giant disservice.

Anyhoo, let’s get back to the Abrasaxes. As the title suggests-  are the Lannisters in SPACE, complete with pretty long haired guy who wants to screw his own family members, a scheming sister and a whiny psychotic man-child. Yes you heard the former correctly the pretty boy (Titus) wanted to marry a woman that was his mother reincarnated, while he revolved ulterior motives behind this later, it left the audience with a chunk of unforgettable time in which you believed he wanted to, essentially, screw his mother. The Abrasaxes have a lot of mommy issues in this film, in fact Mila Kunis’s “victory” line to Eddie Redmayne is, literally “I’m not your damn mother.” As you can tell this film has a lot of writing issues.

Who Mila Kunis does end up screwing in the end is a dog/ angel hybride.

I am not kidding.. And to make matters worse- the hybrid is played by Channing Tatum. And to be honest, there was about as much chemistry between them as those Pandas that refuse to mate in the zoo. So Mila Kunis options in this film are to either screw her son or a dog. Somehow I’m thinking ted 2 is looking pretty damn good to her right about now.

Now about some other parts; as previously mentioned, at one point eddie redmayne (more on him later) kidnaps Jupiter’s family and threatens to kill them if she doesn’t sign over the earth to him, which is all well and good and villainous except we don’t give a shit about these people at all; they’re terrible. Theres like 10 of them, maybe 4 of which get any lines, which includes a sexist greedy uncle, a slimeball cousin who wanted her to sell her f#%$ing utero eggs for 2/3rds of the profit, all of which he spends (wrongly assuming she went through with it) on a new TV and plays video games in his underpants.

HE WANTED TO SELL HER F#$%ING EGGS

I am even not kidding. I wish to the heavens above the mountains below I was but this movie has decided to test my very fortitude in what I can stand and dear lord it reached its breaking points a long time ago. I mean seriously? There’s no alternative? HOW DESPERATE CAN YOU BE?

And oh Eddie Redmayne *long sighful moan*, while he seems like a pretty good actor and seemed really good in the Theory of Everything (I haven’t seen it myself to confirm), Oscar worthy this was not, nor was it Raspberry award worthy- either. He lacked the villainous ooze that even the campiest of the camp can do. He was always either whispering or shouting, no inbetween at all. He could have been so good, but just wasn’t meant to be.

I once heard that the movie Prometheus was the most beautiful film you ever wanted to punch in the face. If that’s true, then this is the most beautiful film you ever wanted to slit its throat out, let the neck blood freeze into blood-icicles, stab the body with the blood-circles, tie the body to an anchor and sent it down the artic sea and allow the ice to freeze on top of the patch of water. Where it will never  be found until the Earth is incinerated; taking this film back to the depths of Hell whence it came and where it belongs.

So I wouldn’t waste your time and money with buying a ticket to the movies, if you want to see it, i suggest waiting till it’s on tv or dvd, because as cool as the visuals are, its probably not enough for everyone. I personally liked seeing it in theaters because I got to enjoy the visuals and made fun of it with my Dad, but if you can’t have someone there to laugh it off with, it won’t be your cup of tea.

Well at least we’ll always have a cardboard cutout of mila kunis for when she married her son for $30: http://www.ebay.com/itm/JUPITER-ASCENDING-JONES-MILA-KUNIS-LIFESIZE-CARDBOARD-STANDUP-STANDEE-CUTOUT-/271676381428

Go on, click on the link, I am not even kidding.

All this being said, I’ll still probably get it on DVD, likely in the $5 movie pile at Walmart.