There is a new wave of music, food, and life quickly moving into Philadelphia and we need to embrace it. Hip new restaurants and boutique popping up all over the city, not to mention the countless apartment buildings and condominiums that are being built right under our noses. The object has taken the bulk of the renovations is nightlife. 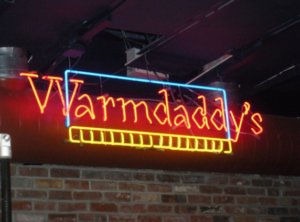 There is always a festival going on, or a star coming to town. However, the real place to be it Warmdaddy’s Restaurant located on Columbus Boulevard. They have been serving soul food and brunch along with live music since 1995. The restaurant has been a favorite of my family’s and I have spent countless dinners there enjoying the atmosphere.

In this past year, Warmdaddy’s has decided to take there live entertainment scene to another level. They have allowed the husband and wife duo “Kindred the Family Soul” host events where they interview artist. Kindred the Family Soul is a pretty prominent R&B group in the black community, they have come out with hits like Far Away and Stars.

There events have drawn tremendous crowds into the restaurant to the point of standing room only and they have gained a huge following on facebook for live streaming the events. I had the pleasure of attending one of these “Kindred Presents” events. The special guest was none other than the outstanding and outspoken attorney and liberal political commentator for CNN, Angela Rye and the three time Grammy Award winning singer and Philadelphia native Jill Scott.

I also had the honor of interviewing the curators and members of “Kindred the Family Soul”, Mr. Fatin Dantzler and Aja Graydon to get a better view of how they are feeling about their journey with this program.

Q: When did you start the events at Warmdaddy’s?

A: We started Kindred presents in February of 2017 after having done one episode in late 2015 it took us nearly a year and a half to get back on the initial idea.

Q: Who is your one dream guest to have at one of the events?

A: The Obama’s would be the dream guest at this time since you can’t bring folks back from the dead to interview ie Prince,Michael Jackson or James Brown.

Q: Why are these types of events important?

A: Platforms for black artist and influential people are always important because there are far too few of them that actually represent us well to our core audience. We are happy to be one of those vehicles and pray that we are able to sustain this for along time.

Q: What was an unexpected lesson you learned from your guests this season?

A: The biggest lesson we have learned from our guest this season is how similar most creative peoples journeys are although people come from different places a lot of familiar ups and downs are the makeup of great stories that produce great people.

Q: What are the different ways young people can find success in the music industry they may not have thought about?

A: Young people start where you are the people around you are your greatest resource.So collaborate and work with those who are closest to you to hone and nurture your skills first and then branch out to like minded individuals in other places but you can’t skip the groundwork it must be in your heart and you must be willing to do the uncomfortable stuff as well as the fun stuff.

As you can see this event has allowed the nightlife to prosper. This little restaurant has brought  so many people together to enjoy wholesome entertainments. These are the relics that we need to keep alive in Philadelphia so that artist always have a platform to express themselves. The simple human interaction that the audience experiences is a vital and healthy part of life. So if you can I suggest that you support the “Kindred Presents” program by either attending an event or watching in Facebook live so Philadelphia knows that its citizen appreciates and enjoy their artistic efforts.