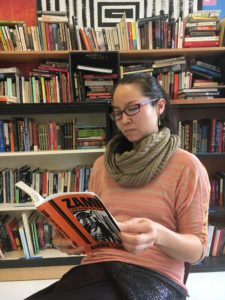 Tenth and eleventh grade English teacher Joshua Block is traveling to New Zealand to visit schools and research education. He will be there from late January until the end of the school year. After knowing that his friend Hanako Franz was looking for a position, he immediately told her and she gladly accepted. Alongside Ms. Franz is a student teacher from Penn, John Taylor-Baranick, or Mr. TB.

Ms. Franz was born in Japan but grew up mostly outside of Pittsburgh. Aside from being a teacher, her hobbies include hanging out and being really loud with her friends, which is one of her favorite things. Another activity she enjoys is doing taiko, which is Japanese drumming, which Ms. Franz describes as  healing. She also loves to read, simply lying down with a book. Although, some of her hobbies like biking could result in pain, but can be laughed at when looking back. On her first day substituting at SLA, she was riding her bike when she hit a pothole, falling on her side. She then got on a trolley and was a little late, but luckily did not have a class first period. Once she healed, she went biking again.

Although teaching was not what she always wanted to do, she had a change of heart when she was in her early twenties.

“I had this moment when something hits you and your thinking really transforms. When I was in Japan, I remember it so vividly, where I was in college but my major was undecided and I was trying to figure out what I wanted to do. I always enjoyed working with young people and education is something that I think is so critical in terms of any sort of like social change,” said Ms. Franz. “So I remember being in my grandma’s kitchen making toast, I had been thinking for months about what do I want to do, and I then I was just sort of like, teaching!”

“I’ve known Josh [Block] for years. When I decided that I was going to sub, I thought that I would just be a sub at a lot of different schools, explore the different schools in the school district because I’ve only taught at two schools in Philly. I decided to do that and then I heard Josh was looking for a substitute. He has a really sweet schedule and it was hard to say no.”

Since being at SLA, there were many reasons that caused Ms. Franz to start up the QSA club once again. When working at Olney, she was apart of their QSA club and thought it would be a good idea to continue that. She knew that Mr. Block supported it in the past and that it was something that he hoped would continue. “For me as a queer educator, it’s always really important for me to be out. My first day, I came out to all of the students because I know how hard it can be when you don’t have any adults around you that are queer.”

So, she wanted to try and start the club to see what the interest level was. If there were students interested, she would want to be apart of helping.

Something that amazed her was during the first Queer Straight Alliance meeting, many students said that they feel like they can be out. “It seems like SLA has created a safer environment than a lot of schools. For the most part students sort of did that after school and weren’t super affectionate in public. So it’s cool to see students hold hands and they can express themselves.”

Some things that stood out to her is how tech savvy the students are at our school. “Students know more about Google Docs than I do,” she said. She has also noticed that the students are encouraged to be creative in many different ways.

At her previous school, she taught ninth graders and the advisory was structured differently. “I never experienced an advisory system where it’s two times a week after class at the end of the day. I like having a space where I get to interact with tenth graders. I think that advisory has the potential to be really transformative and a space where you can build really strong relationships with your students, outside of the class and super academic focus.”

One tradition that Mr. Block’s classes has is a Friday performance, singing, dancing, or more at the end of class.

“We are continuing that, and one Friday, I was trying to get students to do it and a lot of them were shy. They’ll dance at their tables, but won’t do it in front of the class. There was one student who was dancing a bunch at her table during the period, so at the end of class I was like alright, come on, you’re up, and then she wouldn’t do it. Then another student just put a song on, and that student went in front of the class and killed it. The room was dying, Mr. TB was crying because he was laughing so hard. She danced to ‘You Name It’.”

Both teachers and students are happy to have Ms. Franz on board.

“Working with Ms. Franz is a treat. She brings so much life to the classroom and her enthusiasm is contagious. Besides being a smart and experienced teacher, she is a very supportive colleague,” said student teacher Mr. TB, who co-teaches with Ms. Franz.

“Having Ms. Franz as a teacher is a very influential, impactful, and refreshing. Ms. Franz is laid back and is already contributing to SLA, bringing the Queer Straight Alliance club,” said Junior Mekhi Granby. “Having Mr. TB as a teacher is super uplifting, he always has a smile on his face and brings his energy to class every time.”

“She seems like an agreeable person to be around. I haven’t had her for that long so I’m not familiar with her style of teaching yet, but if I had to pick something that I liked it would have to be her class discussions,” said Senior Fatu Castillo.

With all her contributions so far, the students at SLA feel very comfortable and are excited with welcoming Ms. Franz.