On Thursday, February 2nd, Lieutenant Governor Mike Stack made a low-profile visit to SLA. With bodyguards in tow, but without much pomp or circumstance, he represented Governor Tom Wolfe as he toured our school. A Philadelphia native and advocate of STEM, he seemed eager to understand SLA’s unique educational model and chose us specifically for that reason.

“We’re trying to encourage young people to really be involved in Science, Technology, Math, and Engineering,” Stack explained. “I had heard about this great school, and I had always wanted to see it and meet you young people and see what you’re doing.”

As the visit progressed, he visited two STEM classes (11th grade Physics and 9th grade BioChem) and appeared pleased by the school, joking that his briefing to the Governor about the visit would turn into a 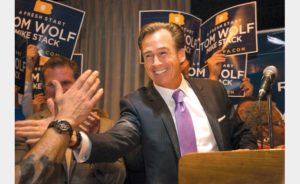 two-hour meeting because of all that he saw.

In terms of his politics, Stack has a lot of ideas for changing our state’s struggling education system. He’s in support of dedicated funding for education, saying that “The politicization of education is what’s holding us back in the city and in the country.”

A staunch advocate for local control of the district, likely stemming from his mother’s career on the Philadelphia school board years ago, he spoke out against the state-run School Reform Commission.

“I’ve been a person who’s wanted to get rid of the SRC for a number of years and I’ve proposed legislation to do it because when my mom was on the board of education,” he said. “Things weren’t perfect, but most of the decisions were left in the hands of local government.”

The SRC, founded as part of a state takeover of Philadelphia’s school district to address fiscal crises in 2001, has received much criticism from school officials, teachers, students, and legislators.

Current SLA students may take the school’s oddities for granted, but Stack emphasized the value of bringing stories about schools like SLA to the discussion about Philadelphia’s management abilities:

“There’s this notion across the state of Pennsylvania that we have big  problems in Philadelphia, that none of our kids are getting educated and that  we’re not focused on the future,” Stack said.

“I always tell them they’re wrong and that  it’s a generalization, it’s a stereotype, and they’re incorrect. So anytime I can get together with our kids I can tell those stories.”

Students might complain about the constant visitors, but those visit reflect the fact that the school continues to be used as a model.

Stack underscored this message, saying that “Science Leadership Academy is a great magnet school that we can hold up as an example of great things going on.”